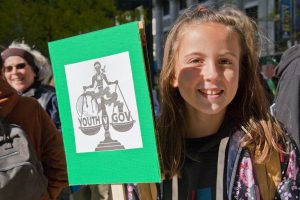 In 2015, 21 young people filed a lawsuit (Juliana et al. v. United States) against the U.S. government. Their goal? To force the government to do more in the fight against climate change. These young plaintiffs are claiming that the government’s willful inaction on climate change violates their, “fundamental constitutional rights to freedom from deprivation of life, liberty, and property.” The government has been arguing for this lawsuit to be thrown out since it was filed, but so far, the courts have allowed it to proceed.

On October 29, 2018, the U.S. District Court in Oregon was supposed to hear the case, but under the request of the Trump administration, the Supreme Court postponed the trial. The fate of the case remains in limbo.

A recent report by the U.N.’s Intergovernmental Panel on Climate Change (IPCC), says that even as soon 2040 we will see the damaging effects of climate change, such as worsening food shortages, wildfires, and a mass die-off of coral reefs. By that time, the youngest of the plaintiffs, Levi Draheim, will be just 33 years old. Another IPCC report from December 2018 adds that we only have 12 years left to make massive and unprecedented changes to reduce greenhouse gas emissions to avoid catastrophic climate change.

The young activists want a judge to order government agencies to work towards lowering the concentration of CO2 in the atmosphere from 410 parts per million (ppm), as it is currently, to a safer level of 350 ppm.

The severity of climate change has been in the public eye, especially since November, when the U.S. government published a report detailing its effects on both the United States and the world. The National Climate Assessment found that if nothing is done about climate change, it could end up costing the U.S. government hundreds of billions of dollars by the end of the century, and kill thousands of Americans.

Kiran Oommen, a 19-year-old student at Seattle University, explained to National Geographic why he joined the lawsuit. “We have little or no representation in the government, yet the effects of climate change will affect us more than anyone else…This is a way we can speak for ourselves and stand up for our future.”

In December 2018, 200 nations gathered in Poland for COP24, The U.N. climate change conference, to come up with a global agreement to reduce greenhouse gases. Despite this global commitment, President Trump has vowed to withdraw the United States from the agreement, even though the U.S. can’t formally do so until the year 2020—just after the 2020 presidential election.

Plaintiff – A person or group who brings a lawsuit against someone to court.

IPCC – Intergovernmental Panel on Climate Change (IPCC), an independent group of leading climate scientists convened by The United Nations, dedicated to providing the world with an objective, scientific view of climate change and its political and economic impacts.