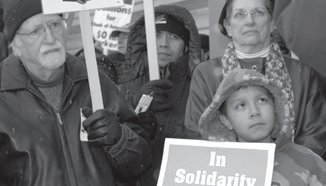 A group of 250 laid-off workers occupied the Republic Windows & Doors factory in Chicago in early December to protest a decision to shut down the factory without adequate warning. The workers were given three days’ notice, not the 60 days required by law. Workers also demanded that they receive pay for vacation and severance (pay given to workers when they are laid off). After a six-day occupation, the workers won and were given two months pay, healthcare benefits and vacation pay.