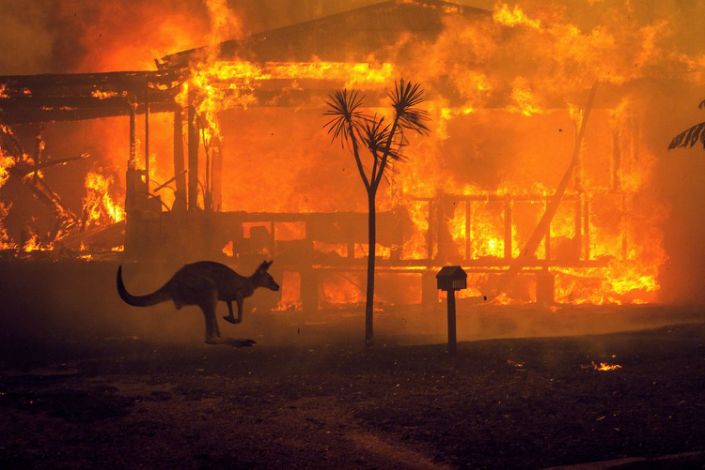 Wildfires, or bushfires, as they are called locally, have always occurred in Australia. But in the last five months or so, Australia has experienced its worst fires yet. The fires have mainly been taking place in the states of Victoria and New South Wales (NSW), but they have been burning all around Australia.

According to the Australian Bureau of Meteorology — the agency that studies weather and atmosphere — 2019 was Australia’s hottest and driest year on record, and for the past five years the record temperatures keep on being broken. The record-breaking temperatures, plus months of drought, contributed to this tragedy because when the environment is hot, dry and windy, bushfires can easily start, especially when lightning strikes.

The fires have burnt over 110,000 square kilometers (over 27.2 million acres) of land, which is more land than the country Cuba. The fires have also taken the lives of 33 people and over a billion animals.

To try to fight the fires, the NSW Rural Fire Service says it had about 100 water bomber aircraft in the sky every day when the fires were at their worst, and the Victoria Country Fire Authority said it had more than 60. The aircraft are mainly used to drop tens of thousands of liters of water on the fires, as well as fire retardant. Fire retardant is a substance that can be used to help stop fires from spreading. However, fire retardant can mildly impact the environment. Animals and plants that live in the water are more impacted by fire retardant than the ones which live on land. Retardant can cause minor effects to your lungs and irritate your skin if you’re touching it without gloves, and the same goes with your eyes, if you’re handling it without goggles.

To try and prevent this catastrophe from happening again in the future, one way is to use Indigenous methods of fire control. The approach involves burning small, controlled fires known as cultural burns. Oliver Costello, from Firesticks Alliance Indigenous Corporation, told the Australian Broadcasting Corporation, “Ideally, a cultural burn helps prevent fire risks, rejuvenate local flora, protect native animal habitat, all while restoring the kinship to the land”. First Australians have been using these practices for tens of thousands of years. They have survived and protected the land by passing on knowledge and land management methods to future generations, with the understanding that all things — people, animals and the land — are connected and depend on one another.

But cultural burning can only go so far if we don’t work to prevent the largest contributor to extreme bushfires: climate change. Peter Gleick, a climate scientist from the Pacific Institute in California, told Time magazine that the bushfires are a “very clear example of the links between climate change and extreme weather.” This means that in addition to using Indigenous land management and fire management techniques, to address this crisis we also need to address climate change.

Glossary
Drought: An extended period of time when there is much less rainfall than usual.