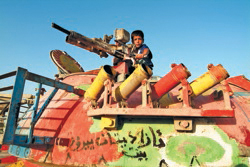 A boy sits on a destroyed Iraqi tank near the border between Iraq and Kurdistan. Kurdish children painted the tank and pushed it to the border as a symbol of peace. Photo: AndrewStern.net

IRAQ BY THE NUMBERS

Estimated number of Iraqis killed so far in the war: 650,000

Number of new U.S. troops that President Bush plans to send to Iraq: 21,500

Percentage of Americans who oppose sending more troops to Iraq: 70%

Cost of the war in Iraq each year: $200 billion

In January and early February major bombings in Iraq killed hundreds of people and destroyed markets and homes. About 3,000 Iraqis are being killed each month according to the United Nations. The United States invaded Iraq in March 2003 and overthrew Iraq’s president Saddam Hussein. As a result, the differences between Iraq’s different ethnic and religious groups worsened and have since grown into civil war.

Since the U.S. invasion, no weapons of mass destruction have been found in Iraq. Polls show that the majority of Americans think the war was a mistake. According to a World Public Opinion poll, the majority of Iraqis want a plan for the U.S. troops to leave.

In January, President Bush vowed instead to send 21,500 more U.S. troops to Iraq to restore security. This angered many people who think the troops should come home. “I think Congress needs to follow the dictate of the American people and withdraw troops and cut off funding,” said Norma Brown of the organization World Can’t Wait – Drive Out the Bush Regime.

Leaders in Congress have said they will not use their power to stop funding for the war. “Democrats will never cut off funding for our troops when they are in harm’s way,” said House Speaker Nancy Pelosi.

Meanwhile, activists are planning more activities and another demonstration for the March 17 anniversary of the U.S. invasion of Iraq. “It’s not about U.S. troop reduction. We want an end to U.S. occupation of Iraq,” said Mahdi Bray of the Muslim American Society Freedom Foundation. “It is we the people who must end this war.”

Why did more than 100,000 people go to Washington, D.C. on January 27 to protest the war in Iraq? President Bush says the U.S. is fighting for freedom in Iraq, but millions of Americans and Iraqis think the U.S. is there to take control of the country.

One girl’s sign read, “Thanks for the deficit, Doofus!” referring to the billions of dollars spent to fight the war.

Protesters chanted, “Money for jobs and education, not for war and occupation!” Julia, 9, who was at the protest, said the Iraq war “is not for our protection; it’s just for oil.”