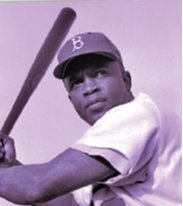 1. I was born in Cairo, Georgia, on January 31, 1919, into a family of sharecroppers (small farmers who give a share of crops to the landowner as rent).

2. In 1947 I became the first African American to play Major League Baseball since 1889 when baseball became segregated. I played for the Brooklyn Dodgers.

3. In my first season with the Dodgers, I was named National League Rookie of the Year and led the league in stolen bases. I led the Dodgers to six World Series and one World Series Championship.

4. I was a spokesperson and a director of the NAACP (The National Association for the Advancement of Colored People) from 1957 to 1967.