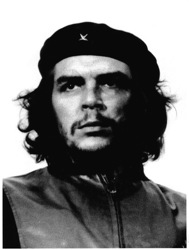 Clue #2: As a medical student, I traveled around Latin America and saw the conditions of the poor. I wrote a book about the trip and it became a movie in 2004 called The Motorcycle Diaries.

Clue #3: I became a Marxist (a person who follows the teachings of the philosopher and activist Karl Marx) and believed the only solution to the problems of the poor was revolution.