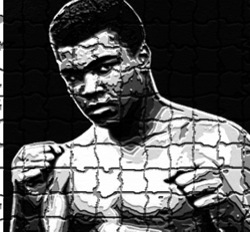 Clue #1: My name used to be Cassius Clay but I changed it when I became a Muslim.

Clue #2: I am widely known to be the greatest heavyweight boxer of all time.

Clue #3: I was outspoken against racism and the U.S. war in Vietnam and refused to join the U.S. Army. As a result, I was stripped of my boxing title in 1967 and was not allowed to compete professionally for three years.