Where the Candidates Stand: Iraq War

Use IndyKids‘ ballot to hold an election in your classroom. To get the information you need to vote, read about the candidates positions on the Iraq War, the Economy, Global Warming, Education, Immigration and Health Care. And find out how much money the candidates have, and who’s funding them.

The U.S. invaded Iraq five years ago to stop Iraq from using weapons of mass destruction. No such weapons were ever found, but the war continues. One million Iraqis and 4,100-plus U.S. troops have been killed. Here’s what the candidates say: 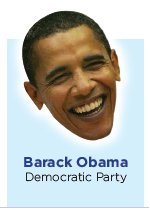 Remove most U.S. troops from Iraq by the year 2010; leave some troops to fight al Qaeda and to protect U.S. diplomats and U.S. citizens in Iraq

Keep U.S. troops in Iraq to establish a stable government; no withdrawal until al Qaeda in Iraq is defeated and a capable Iraqi security force is in place

Withdraw all U.S. troops, contractors and bases within six months; United Nations peacekeepers in Iraq; financial aid to help put Iraq back together

Withdraw all U.S. forces immediately from Iraq, Afghanistan and all other foreign countries; voted against Iraq War and against all funding for it

Withdraw U.S. troops as soon as possible; believes the invasion and occupation of Iraq were mistakes

Withdraw all U.S. troops, contractors and bases immediately; wants the U.S. to pay back the Iraqi people for the destruction it caused