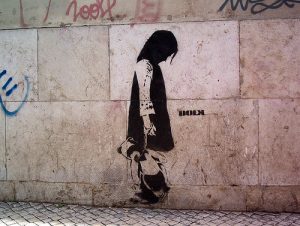 More police officers in schools means more kids now get expelled or arrested for behaviors that before would have meant a trip to the principal’s office. Photo: Flickr Graffiti Land

In November, 25 Chicago middle school children were arrested for taking part in a food fight. Police officers handcuffed the children and took them to jail. They were charged with reckless misconduct.

In 2007, police in Florida arrested a six-year-old girl for having a tantrum at school. They handcuffed and arrested her. They charged her with a felony, which is a serious crime.

Why are children being arrested for food fights and tantrums? According to Peter Price, a former teacher who is now a lawyer, having police officers in public schools, also called “school security officers” or “school resource officers,” means more kids get arrested.

According to the National Center for Education Statistics, the number of police officers in schools has risen by 30 percent in just the last ten years. As a result, more kids now get expelled or arrested for behaviors that before would have meant a trip to the principal’s office.