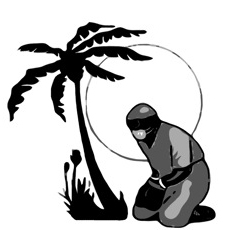 A military prison on the U.S. naval base in Cuba Since 2002 the Bush government has held people that it believes may be members of al-Qaeda or the Taliban. The U.S. government calls these terrorist organizations. Prisoners from 42 countries have been held at Guantanamo, some of them children under age 16. There are 450 men being held in the prison. The military says that many of the people held there are innocent. Several prisoners who have been released from Guantanamo report that they were tortured. The Commission on Human Rights at the United Nations, which investigates torture around the world, was scheduled to investigate the situation at Guantanamo in December 2005. But the investigation did not take place because the U.S. government refused to allow the Commission to interview the prisoners.

What’s going on inside the prison walls?

The U.S. government is believed to be carrying out these techniques in prisons in Guantanamo Bay,  Afghanistan, Iraq and possibly other places. The Bush government says these measures are necessary to get suspected criminals to give more information about possible crimes.

What do you think? E-mail us at indykids@indymedia.org

4 thoughts on “What is Guantanamo Bay Prison?”