What Does the L.A. Teacher Strike Teach Us? 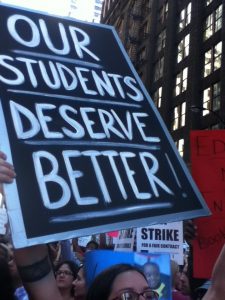 After a historic six-day strike, Los Angeles teachers won their demands for smaller class sizes, a nurse for every public school, a librarian for every middle and high school in the district, a six percent pay increase and a cap on the number of charter schools in the district.

This strike, which was the nation’s largest teacher strike in decades, comes after an era of funding cuts to public schools, which the striking teachers argued impacts both students and teachers. For example, NPR reported that in most L.A. Unified School District (LAUSD) middle schools, the largest core classes have 37 kids—with other classes sometimes as large as 46. The national average class size is 26 to 28 students at similar middle schools. LAUSD also has one of the highest concentrations of low-income students in California, with more than 80 percent living at or below the poverty line. Research shows that large class sizes mean that students, especially those with limited resources at home, might not get the attention they need at school to learn most effectively.

The Los Angeles County School District, the union representing the teachers and the L.A. Mayor’s Office will now work together to advocate for increased county and state funding for the schools.

The strike speaks not only to the support for public education reform in Los Angeles, but also across the country. From Arizona to Oklahoma, Oakland and Denver, more people are calling for increased funding for public education—and using strikes to accomplish that goal.

Peter Greene, a Forbes contributor who spent 39 years as a high school English teacher, wrote, “When Los Angeles teachers walk out, it will resonate across the country because the issues they walk for are about the health and survival of public education for children in their communities, and those are the same issues that teachers all across the country are struggling with as well.”

Strike: When workers cease to work in response to employee grievances. During a strike there are usually negotiations on behalf of the workers and employers until an agreement is reached.

Charter school: A school that receives government funding but is privately operated, sometimes by for-profit companies.