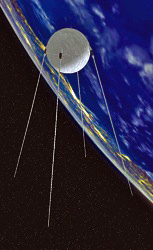 I am an artificial satellite weighing about 183 pounds.

I was launched into space by the Soviet Union, now called Russia, on October 4, 1957.

I circled the earth every 96 minutes, making a “beep beep beep” sound over amateur radio.

Answer: I am Sputnik