“We Will Not Be Erased”: LGBTQIA Community Challenges Trump’s Assault on the Rights of the Transgender Community 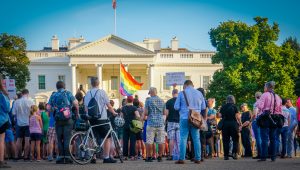 The Trump administration sparked a heated discussion about transgender individuals in early October, when a memo was leaked by the government which narrowed the definition of gender. In the memo, the government states that there are only two genders—male and female. The Department of Health and Human Services’ memo says that, “the sex listed on a person’s birth certificate, as originally issued, shall constitute definitive proof of a person’s sex unless rebutted by reliable genetic evidence.”

This has caused much distress to the estimated 1.4 million Americans who identify as transgender—that is, a gender that is different from that which was assigned to them at birth. These people will have a rough time as Trump is using this narrow definition to challenge civil rights protections and whether or not transgender people will be allowed to serve in the military.

The LGBTQIA community has not been silent about this issue, and they have led many protests. The phrase, “We will not be erased” has been their statement throughout these rallies, emphasizing the fact that they are humans and should be recognized for who they are. However, protests were not the only way of spreading word; many took to Twitter to express their anger over this. Michael Crowden, a protester supporting this movement, states: “Trans people already face disproportionate levels of violence. It is cruel to redefine gender and effectively erase transness from existence. What we need is for trans people to be protected, not made more vulnerable @realDonaldTrump.”

Transgender: People whose gender differs from the gender/sex they were assumed to be at birth.