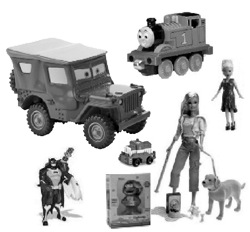 Many popular toys have been recalled recently because they contain lead paint. You may have some of these toys. They include Thomas & Friends wooden train sets, Sarge figures from the movie Cars and Curious George spinning tops.

More than 10 million lead-contaminated products have been recalled this year, according to data from the U.S. Consumer Product Safety Commission (CPSC). Lead is a metal that was used in paints until the United States made it illegal in 1977. Lead is extremely toxic and can damage people’s organs and nervous systems, delay or prevent growth and reduce IQ.

Some other toys have small, powerful magnets that can come loose and be swallowed by kids. If more than one magnet is swallowed, they can attract each other in the gut and cause holes that can become infected and cause death.

Mattel, the world’s largest toy company, is recalling many types of toys. Most of the toys were made in China by companies that work with Mattel. Almost 80 percent of the toys now sold in the U.S. are from China because they cost very little to make to make there. To keep prices low the Chinese toy makers sometimes use low-quality or illegal materials.

There are so many factories that China’s government has a hard time watching over them. Nancy Nord, chairwoman of the CPSC, said, “There is no excuse for lead to be found in toys entering this country.
It is totally unacceptable and it needs to stop.”

But as long as people prefer cheap toys, problems like this will probably continue.