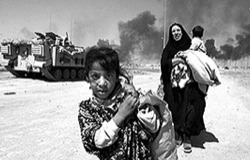 A new study by the Johns Hopkins Bloomberg School of Public Health and Al Mustansiriya University in Baghdad says that more than 650,000 Iraqis have died since the U.S. invaded Iraq in March 2003. Most of the deaths were caused by violence. The researchers based their findings on interviews of 1,849 households throughout Iraq.