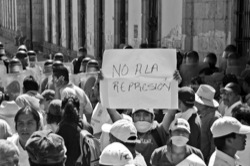 The sign reads “No to the repression” in Spanish. Protesters demand an end to the Mexican government’s repression of people standing up for the rights. Photos: John Gibler 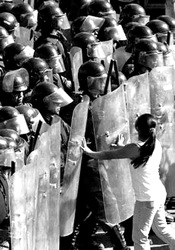 For the past 26 years, teachers in the state of Oaxaca (wah-HAH-kah), Mexico, have had a tradition of striking (refusing to work for a period) each year. They occupy the historic town square in an effort to get more government money for schools and higher pay for teachers.

On June 14 at a peaceful protest in the main square of the state’s capital, Oaxaca’s governor Ulises Ruiz Ortiz launched a crackdown on the strike. Police attacked the protesters using tear gas, smoke, grenades and guns. Several people were killed.

Since then, the governor left the state, and the Oaxaca state government is no longer working. The teachers are continuing their strike and are now joined by other concerned citizens. The main demand of the protesters is that Governor Ortiz resign because of his repression of the people. On June 17 the protesters formed a citizens’ group called the Popular Assembly of the People of Oaxaca (APPO) to coordinate their campaign.

After the U.S. government expressed disapproval with the situation in Mexico, the Mexican president ordered federal police to take over the city by force. About a dozen people were killed, including a 15-year-old boy, as the police took over the city. People throughout Mexico and the world have held demonstrations and activities in support of the protesters in Oaxaca.

In Oaxaca, many people are very poor and a few people are very rich. Because of corruption (cheating and stealing) in the government and among the rich, there is less money for the poor and for education. Zenén Bravo Castellanos, a teacher, said, “The people of Oaxaca are tired of so many corrupt governments.” 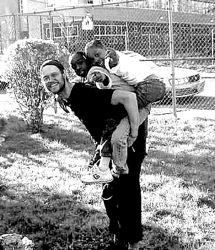 THE DEATH OF A PEOPLE’S JOURNALIST

Independent journalist Brad Will was shot and killed on October 27 in Oaxaca by military men, including a local police officer. Brad was a videographer, which is someone who not only writes stories, but also documents events with video.

He worked with Indymedia, the organization with which IndyKids is partnered. Brad was a rare kind of journalist who reported on the stories of poor people who might otherwise be forgotten.

“Brad was where people who were poor or who had had their economies shattered were trying to change things,” said Eric Laursen, a freelance journalist in New York. “He wanted to be [in Oaxaca] for two reasons: to document it and to support it.”