Under the Same Moon: A Review

Imagine being separated from your parents for years, with a weekly phone call as your only connection. Thousands of Mexican children face this problem every day as their parents work in the United States to make more money.

A film called Under the Same Moon shows us how people without legal working papers live in the United States in fear of deportation. Deportation means that you must leave the country. 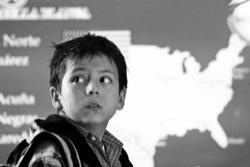 The film follows Carlos, a nine-year-old Mexican boy whose mother goes to work in the United States. After his grandmother’s death, Carlos tries desperately to find his mother by crossing the border into the United States. Every day he is afraid the police and border patrol agents will capture him.

As he travels from Texas to California, Carlos meets many people trying to live and work in the United States, and he realizes that their problems are just like his. He meets some people who want to help him and others who want to hurt him. The film shows how desperate people become when they need money to live and support their families.

Carlos’ mother works morning to night to raise money for Carlos, who she thinks is back home. She learns that some people will take advantage of her because she does not have legal working papers. Many immigrant workers fear asking the police for help, so employers may treat them poorly or refuse to pay them.

Many people cross the border illegally because they want a better life for themselves. Jobs in the United States pay more than they do in Mexico. This film shows that while some people cannot live a decent life unless they break the law, they certainly are not criminals. The only crime is that people have to live this way.