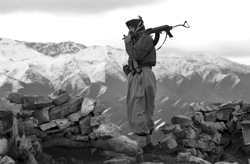 A Kurdish fighter stands guard at sunrise. The country of Turkey has threatened to cross the border into Iraq to take out Kurdish rebels, which Turkey calls “terrorists.” Photo: San Diego Union-Tribune

The military of the government of Turkey built up its troops along Turkey’s border with Iraq in late October. Turkey threatened to invade northern Iraq where the Kurds live. This region is considered to be safer than the rest of Iraq. Many are concerned that an invasion could widen the war in Iraq and lead to more deaths.

Turkey crossed the Iraq border and attacked a Kurdish independence group called the Kurdish Workers Party (PKK) after the PKK killed as many as 17 Turkish soldiers. Turkey accuses the Iraqi and U.S. governments of protecting the PKK in Iraq. But Kirim Yildiz of the Kurdish Human Rights Project says that Turkey’s military actions are about something much larger than the PKK.

“They do not want to see any development in relation to the Kurdish self-determination (independence) in Iraq,” Yildiz told the news program Democracy Now.

Turkey: A country in southeastern Europe. The U.S. government supplies Turkey with large amounts of military aid and weapons.

Kurdish Workers Party (PKK): A group that was created to fight for the independence of the Kurdish people.