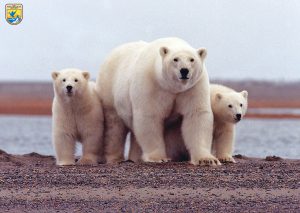 The Trump administration wants to allow companies to drill for oil in the pristine Arctic National Wildlife Refuge (ANWR), home to the largest untapped oil reserves in the United States, by the end of 2019. The Bureau of Land Management released the final environmental impact statement in September promoting oil and gas exploitation in the ANWR — “the result of a hasty, flawed, inadequate, and secretive review process,” according to Indigenous Environmental Network.

If oil drilling occurs in the ANWR, scientists warn that oil can spill on land and endanger wildlife by destroying the insulating ability of fur and water repellency of feathers. Many birds and animals also ingest oil when they try to clean themselves, which can poison them. Wildlife migration routes might be disrupted by noise pollution, traffic and fences. Haze, toxic chemicals and dust will pollute the air and water, and dangerous methane emissions will contribute to climate change.

While many scientists warn of the disastrous impacts of oil drilling, Politico has revealed that the Trump administration “altered” the important environmental assessment by its own scientists in order to allow drilling to be approved faster. Documents leaked to Politico reveal that the work of scientists “has at times been altered or disregarded to underplay the potential impact of oil and gas development.”

People who live in the nearby Arctic Village don’t want Trump to make oil drilling legal in the ANWR and are resisting. “We’re proud to be Gwich’in. We’re proud to be caribou people. We love our food. We love who we are, so we’ll never give up on that,” Neetsa’ii Gwich’in elder Sarah James said to Alaska Public Media. “We’re never going to surrender.”

“We have the strength of our ancestors behind us, and the knowledge and power of elders who have guided us in protecting the Porcupine caribou herd and the sacred coastal plain,” stated Bernadette Dementieff, executive director of the Gwich’in Steering Committee. “The Gwich’in are protectors, and we will not give up.”