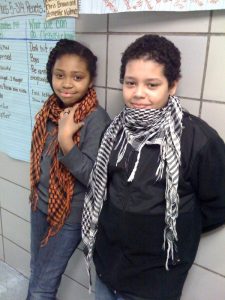 In many schools, donning a checked scarf called a kaffiyeh (pronounced “Kuh-FEE-ah”) is all the rage. Here’s a look at the scarf’s origins.

1. A kaffiyeh is a traditional headdress for Arab men. It is worn throughout the Middle East.

2. In the 1930’s the kaffiyeh became a symbol of Palestinian resistance to British occupation. Today people around the world wear the kaffiyeh to show solidarity with the people of Palestine.

3. White kaffiyehs are popular in the gulf states. Palestinians mostly wear black and white kaffiyehs while Jordanians wear red and white ones. Other colors are made for the fashion and tourist industry.
Pedro Lahoz Wolfe, 8, lives in New York City