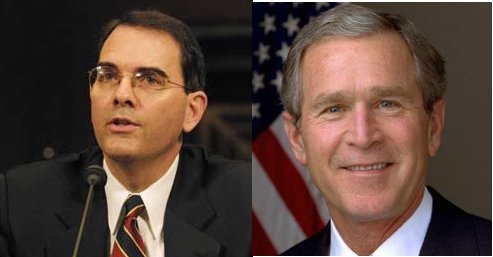 The release of secret memos about the Bush administration’s torture of prisoners could lead to investigation and punishment of top officials including Judge Jay Bybee (left), a Bush lawyer, and to former President Bush (right).

President Obama released a set of secret memos to the public in April. These memos contained details about how the Central Intelligence Agency (CIA) questioned people it caught in other countries following the September 11, 2001 attacks. The harsh techniques the government used to get information from prisoners are considered to be torture, which is known to produce wrong information and is illegal under U.S. and international law.

The week after Obama released the memos, the U.S. Senate Armed Services Committee published a report on its own investigation into the torture of prisoners. The committee found that top officials gave the go-ahead to abuse prisoners.

The report says: “The abuse of detainees in U.S. custody cannot simply be attributed to the actions of ‘a few bad apples’ acting on their own.” It goes on to say that senior U.S. officials approved of these illegal techniques and said they were legal.

Now the question is whether the Obama administration will investigate and punish the top officials who violated laws and approved of torture. While President Obama first said that he would not put the former Bush officials on trial, he later changed his mind and said that Attorney General Eric Holder should make this decision.

Judge Jay S. Bybee, a Bush administration lawyer, defended his signing of the memos. “I believed at the time, and continue to believe today, that the conclusions were legally correct,” he told the New York Times.

On April 23 a coalition of human rights groups delivered a petition with 250,000 signatures to the attorney general demanding that he investigate the Bush administration’s use of torture.