The Pressure’s on Coca-Cola 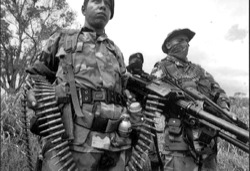 Ties to paramilitary groups in Colombia have led to a campaign against Coca-Cola. Photo: Eros Hoagland

Coca-Cola is a giant international corporation with employees all over the world. In Colombia, South America, workers at the Coca-Cola bottling plants organized a union to help improve their working conditions. But the Coca-Cola company doesn’t want its workers to have a union.

Since Coca-Cola is known around the world, the company can be influenced by consumers in many places. There is an international effort to push Coca-Cola to stop attacking the workers’ union.

Ray Rogers, the founder of the Campaign to Stop Killer Coke said, “It’s going to cost Coke a lot more than they have to gain if they don’t clean up the situation.”

The campaign is seeing an effect. In July the TIAA-CREF investment company decided to drop Coca-Cola from its Social Choice Account. This is a fund that tries to invest in companies that are considered socially responsible and that do not make things like weapons, alcohol or tobacco. Now Coca-Cola is included on this list of irresponsible companies.

Thousands of miles away the union activists in Colombia are thanking activists in other countries. Says William Mendoza, one of the union organizers, “We are glad you are with us.”

For more information, go to www.killercoke.org