The Olympics are coming to China this summer — but not without controversy over Tibet, a province of China where the Tibetan ethnic group lives. As the Olympic torch made its way from Greece in April, it was met with protests along the way, including in London, San Francisco and New Delhi, India. Demonstrators say the Chinese government is abusing the human rights of the Tibetan people. 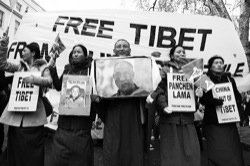 On March 14, days of protests broke out in Tibet against the Chinese government. After Buddhist monks were arrested by the Chinese government, angry Tibetans burned cars and attacked Chinese shopkeepers and buildings such as the Bank of China and China Telecom Corp. These are seen as symbols of the discrimination and exploitation Tibetans experience under Chinese rule. Chinese police used force to stop the protests.

While many human rights advocates are using the Olympic torch relay to bring attention to Tibet, some observers believe the U.S. government is using the media to make China look bad. China is a competitor to the United States’ economic and military power in the world.

In the past 50 years Tibetan groups that oppose the Chinese government and the Dalai Lama have received millions of dollars from the U.S. government. This is what has led critics to believe that Tibet is used by the United States in a campaign against China.