The Future of the Affordable Care Act 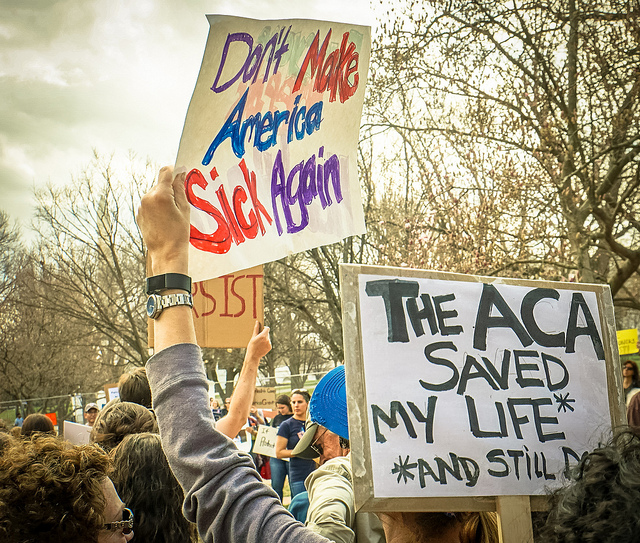 On Thursday, May 4, the U.S. House of Representatives voted 217-213 to repeal the Affordable Care Act and replace it with a new bill that would reduce coverage for tens of millions of Americans. Supporters of the ACA protested outside of Capitol Hill after the vote. Photo by Ted Eytan/Flickr

In 2008, the Antelope Valley Community Clinic in Los Angeles County began running a “Care-A-Van Mobile Clinic” to provide health services to underserved low-income residents. At first, one nurse practitioner and three staff would ride around in the van, but the clinic has expanded. Last year they gave care to 43,000 patients.

The clinic’s growth is due in large part to the Affordable Care Act (ACA), the health care plan that President Obama signed into law on March 23, 2010. The act gave free or subsidized health insurance to millions in the United States and allowed hundreds of community clinics to offer care to sick people for little to no cost.

But the future of the Antelope Valley Community Clinic and others like it is now on the line.

President Trump and Congressional Republicans have put forward a plan to repeal President Obama’s Affordable Care Act. In March 2017, they introduced the American Health Care Act (AHCA) as a replacement. According to the Congressional Budget office, under this plan, “the number of people who are uninsured would increase by 18 million in the first new plan year following enactment of the bill.” Americans over 65 on Medicare, as well as people with pre-existing conditions, would be impacted by the plan and see their health care costs increase dramatically.

Activists are fighting the repeal of the ACA, arguing that removing the law will harm women’s reproductive rights, citizens with disabilities, those living in poverty, patients with pre-existing conditions, and many others.

Republicans decided not to vote on the AHCA on March 24, 2017, because not enough members of the House of Representatives supported the act. However, in April 2017, Republicans proposed a slightly revised version of the AHCA. And on Thursday, May 4, the House of Representatives voted 217-213 in favor of repealing the ACA and replacing it with a bill that would leave tens of millions of people without health insurance.

After the bill was passed, protesters gathered outside the Capitol building in Washington, D.C.. Senator Bernie Sanders said in a speech at the protest, “President Trump, you do not stand with the working class of this country when you throw 24 million people off of health insurance, when you raise premiums for older workers.” 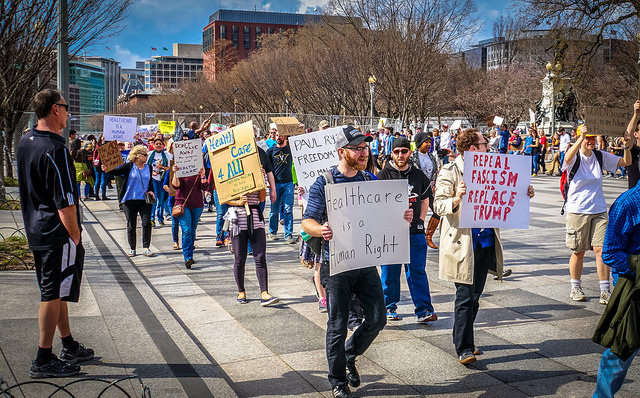 The Affordable Care Act allowed hundreds of community clinics across the country to care for low-income sick people at little or no cost. Photo by Ted Eytan/Flickr

The ACA has helped many people and has support from a wide section of people in the United States. A part of the Women’s March
on Washington was devoted to keeping the ACA, funding Planned Parenthood and protecting women’s health.

People are protesting because so much is at stake. The Antelope Valley Community Clinic and others like it provide many types of health care to people who wouldn’t otherwise have it.

In one advertisement critical of the repeal of the Affordable Care Act, a disabled military veteran told President Trump that if he wants to be a legitimate president he needs to act like one. The vet says, “You lost the popular vote. You’re having trouble drawing a crowd. And your approval rating keeps sinking.” He says this while he is lifting weights with one leg. Then he says, “But kicking thousands of my fellow veterans off their health insurance by killing the Affordable Care Act, and banning Muslims, won’t help,” The vet says that this is not the America he sacrificed for.