The Frog Keeper: An Interview About Pet Frogs 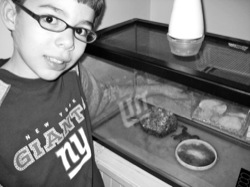 How long have you had these frogs?

A little over a year. My old science teacher was giving them away. There was a raffle and it was 100 percent sure I would win.

Why were you so sure?

Because I was the only one who entered the raffle.

How do you take care of the frogs?

I feed them three to five food sticks every morning, broken in half. But it’s okay if I miss a day. When you see the water go below their waist, you have to add water. You have to clean the tank once a month. But you can’t use soap because it will damage their health.

It’s cool to study them. They swim; they don’t jump. They like to hide behind the rock. The larger one is a female, and the smaller one is a male. They’re cool in their own way.