The Fate of Horse-Drawn Carriages in Central Park 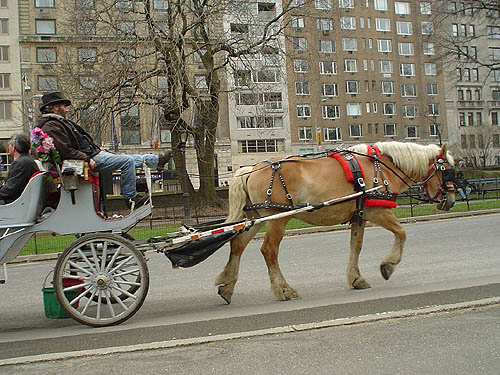 Animal rights activist argue that horse-drawn carriages in Central Park, such as the one pictured here, are suffering under cruel conditions. PHOTO: Michael Femia/Flickr

Since 1858, Central Park South has featured one of the city’s most popular tourist attractions: a horse-drawn cab touring the busiest parts of New York. Many horses suffer in New York with people getting on what they think is a fun ride.

During the 2013 New York mayoral race, current Mayor Bill de Blasio advocated for a ban on horse-drawn carriages, stating, “They’re not humane.” Advocates of the ban argue horses are forced to work for unreasonably long periods, up to nine hours a day, seven days a week. On the streets, carriages have no turn signals, which confuses car drivers and leads to accidents. Moreover, horses have died of heat stroke because they receive little water and work in hot temperatures. In the stables, horses stand in their own waste and have no place to graze. Edita Birnkrant of the group Friends of Animals called the industry “animal abuse posing as tourism.”

Horse-carriage supporters claim banning the rides will risk 300 jobs. Animal rights activists have recommended replacing them with vintage electric cars. But many unions, such as the Taxi Alliance are against that proposal because it would increase competition among cabbies.

Mayor Bill de Blasio anticipates resolving the issue in 2016 after years of protests and uncertainty. No matter the outcome, the controversy has sparked an important discussion on the role of government in animal welfare.