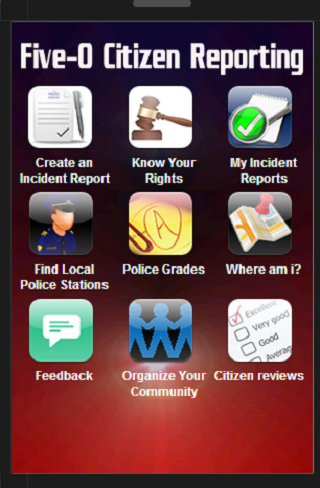 Invented by three teenagers from Georgia, the “Five-O” app provides a space for citizens to rate and track their interactions with police officers. PHOTO: Wikimedia Commons

Police use of excessive and often fatal force has frequently been in the news over the past year and is being tracked by the Guardian’s project The Counted, but is anyone keeping track of times when citizens face police violence but people don’t die? An app called “Five-O” was created in 2014 by three teenage siblings, Ima, Asha and Caleb Christian from Georgia. The siblings decided to create the app after two police officers entered their house with guns drawn and didn’t lower them, even after it was apparent that a mistake had been made.

“Five-O” provides a space for citizens to rate and track their interactions with police officers, whether positive or negative. The app has a “Know Your Rights” section, which helps answer questions users have about their rights in police encounters, because, as 16-year-old Asha said, it is not until “you are face to face with an officer that you realize what the deal is.”

The long-term plan for “Five-O” is to include other countries outside of the United States, including Great Britain, Canada, Brazil and Russia. Asha said they hope the app will become a “global repository of unbiased police data” and will improve community relationships with police officers.