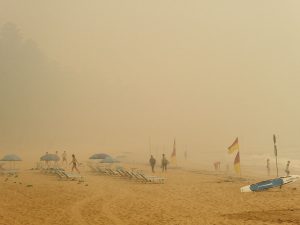 For several weeks 100 wildfires have been burning across eastern Australia, torching 5.3 millions acres, or 2.1 hectares, of land. That’s around 17 times the amount of land burned in the Amazon rainforest fires in August 2019.

While wildfires are common in the Australian summer, the fires this year are at levels never before seen. This is a combination of drought and increased temperatures, both of which are made worse by climate change. They have been described as “mega fires” which would take weeks to put out.

This week, Sydney, Australia’s largest city, was covered in a blanket of smoke that pushed the air quality to toxic levels, prompting authorities to restrict outdoor access for schoolchildren.

Climate emergency rallies are being planned for the city to demand the government does more to address the fires and take action against climate change.