Student Pretends to Buy Wilderness to Save It 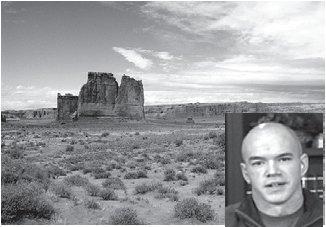 Student Tim DeChristopher pretended to buy land near Arches National Park in Utah in order to protect it from drilling for oil and gas. Photos: PARAFLYER/FLICKR.COM; DEMOCRACY NOW!

To disrupt an auction (a public sale to the person who offers the most money) of public wilderness to the oil and gas industry, a college student and environmental activist purchased 22,000 acres of public wilderness, with $1.8 million he didn’t have.

On December 19, University of Utah student Tim DeChristopher pretended to be a buyer at an auction of 149,000 acres of public lands located in southern Utah. The land was being auctioned off to members of the oil and gas industry so that they could drill and take these resources from the land. Environmentalists protested the auction, saying drilling would destroy ecologically sensitive areas in Utah.

Instead of standing outside, protesting the auction, DeChristopher decided to take a different action.He walked inside the auction and pretended he was a buyer.

“When faced with the opportunity to seriously disrupt the auction of some of our most beautiful lands in Utah to oil and gas developers, I could not ethically turn my back on that opportunity,” wrote DeChristopher in a public statement released online. “By making bids for land that was supposed to be protected for the interests of all Americans, I tried to resist the Bush administration’s attempt to defraud the American people.”

DeChristopher successfully bought ten parcels of land — and drove up the price for the rest of the land for sale. Because DeChristopher didn’t have enough money to pay for the land, he was arrested for fraud.

To help DeChristopher avoid fraud charges, environmental activists have raised enough money to cover the down payment for the land. Now activists are waiting for the Obama administration to decide what will happen to the rest of the land.