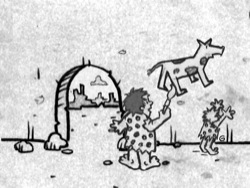 In southern France, Spain and Australia there are many caves whose walls were painted by people thousands of years ago. There are also designs on the ceilings of the caves — zigzags, curves, swirls and long tracks of lines known as “finger fluting.”

Most people have thought that the designs hold a deep religious meaning. However, after comparing the lines to the size of fingers of kids today, some researchers think the finger fluting was created by young children who ran their fingers along dusty ceilings when their parents held them up or carried them on their shoulders through the caves. Over time that dust hardened into rock and the designs were left permanently.

Kids and teenagers may also have done some painting themselves. Archaeologists have found small painted handprints and pictures that might be the Stone Age’s version of graffiti — or doodling! But like kids today, Stone Age kids didn’t just get to be artistic. They also had to work, and researchers now think some of the tools and weapons they found may have been made by young people who were not yet expert toolmakers.

As archaeologist Steven Kuhn says, for a long time “children’s activities have been ignored at [Stone Age] sites,” even though since cave people did not live very long, there were high numbers of children within cave societies. With this new research, more details about the lives of children many years ago might come out of the darkness of the caves into the light.