President Obama signed the American Recovery and Reinvestment Act into law on February 17. The biggest spending bill since World War II, the $787 billion bill offers $288 billion in tax cuts and $499 billion for social programs. By providing money to help the poor, working people, the environment and other initiatives, the government hopes to provide jobs and help the economy.

“Today does not mark the end of our economic troubles. Nor does it constitute all of what we must do to turn our economy around. But it does mark the beginning of the end,” Obama said after he signed the bill.

Some economists, however, question the bill’s ability to improve the country’s economic problems. “The problem with the stimulus package is not that it helps the wrong people. For the most part, it helps the right people. But it’s too small by a factor of about two-thirds,” said journalist and economist Robert Kuttner on
Democracy Now! news program. 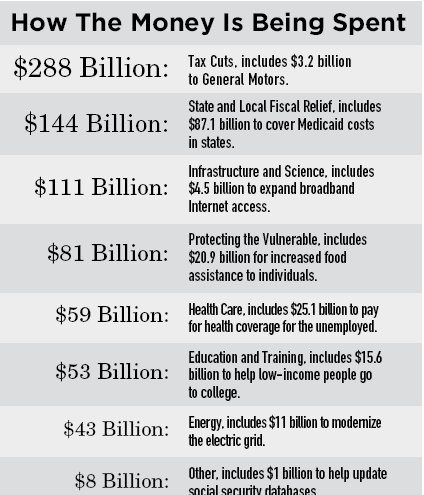