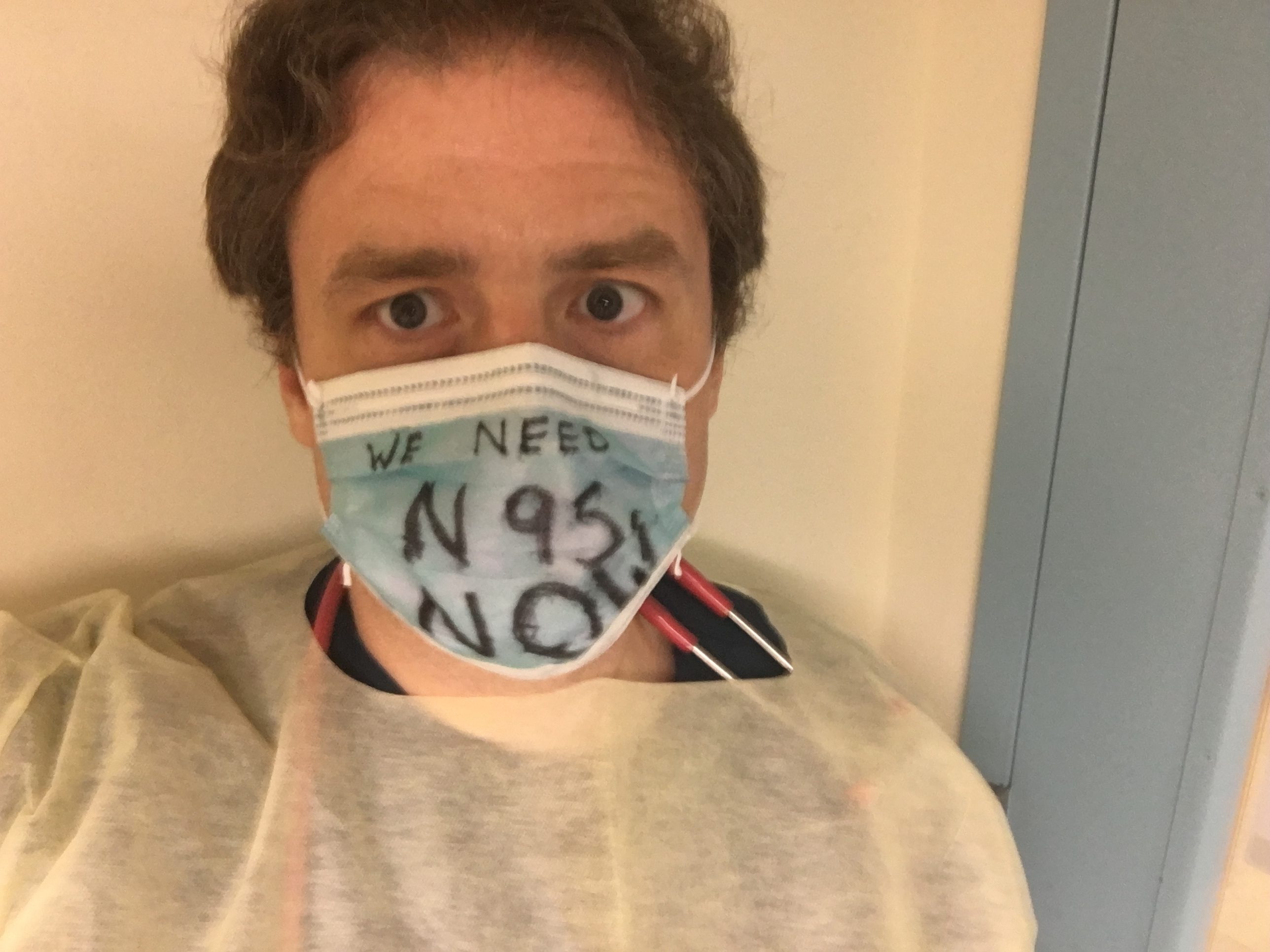 Sean Petty has been a nurse for 13 years and is currently a pediatric emergency room nurse at a public hospital in the Bronx. This interview took place via email in April 2020 during the height of the coronavirus outbreak in New York City, a shorter version was published in our Summer Issue.

Dayanara: Sean, why did you choose a career in healthcare?

Sean: As a kid I was always the person in my friend circle that was trying to make sure everyone was OK. [Being a nurse] was the full package. It was a meaningful job that would utilize my intellect and my compassion. I was already active in social justice issues and could envision myself being able to combine my profession with fighting for a better world.

Dayanara: What motivates you to keep going to work every day?

Sean: My coworkers, my patients and the mission of the public hospital system. We work hard to get kids the comfort and support they need when they are injured or sick. If we didn’t show up, those kids wouldn’t get that kind of care.

I love working in the public hospital system. Some hospitals won’t take care of you if you don’t have the right insurance. Our job is to take care of everyone—regardless of how much money they have or their immigration status. Many people in New York City are afraid to go to hospital because of being deported. In the public hospital system, we don’t turn anyone away and we protect people’s information. We just need more staff and more resources to take care of our patients in a better way.

Dayanara: How has your day-to-day changed since the outbreak of COVID-19 in the United States?

Sean: Our hospitals have been overflowing with patients, so our Pediatric Emergency Room has been turned into a place where some of the adult patients who need a hospital bed wait until one opens up. So for the first time in my career I have been taking care of adult patients.

This is a huge challenge. Adults, especially older adults and the ones getting sick from COVID19, have lots of health problems that I haven’t had to focus on since nursing school. I’ve had to learn things very quickly and this situation is definitely not ideal. We would have benefited from more training. But I’m glad I can help out my fellow nurses in the adult emergency room who have been overwhelmed.

Dayanara: You are on the board of directors with the New York State Nurses Association, how long have you held this position?

Sean: Eight years. It has been an amazing experience. I get to represent the issues facing nurses in our hospital system at a statewide level, learn from other nurses who are doing the same, and then make plans to help them using the resources of our union. It’s definitely not easy. You have to learn to disagree with people and still work together. You have to make tough decisions about which, if any, politicians to support and for what reasons. For instance, we had a huge debate about whether to support Governor Cuomo. He had closed lots of hospitals which hurt a lot of healthcare systems and decreased the number of nurses. But he also said that he supported a law to guarantee a certain amount of nurses for a certain amount of patients. We call this ratios. It turned out he was lying and he didn’t support this law. So many of the Board of Directors were fooled by him.

The main thing I have really valued as a Board member is helping to build up a program of organizing nurses in the hospitals themselves to organize and fight for the things we need. We call this the Member Education and Leadership Development committee. I also was a founding member of the Disaster Relief and Climate Justice committee which has focused on how unions and nurses can and should fight to end climate change.

Dayanara: What have you and the association been doing to fight for better working conditions for healthcare workers before and during this pandemic?

Sean: Lots. But our enemies are strong. The way the healthcare system works is that the people that run it are always trying to either make money or save money by only hiring the bare minimum of nurses and supplying the bare minimum of hospital beds and other supplies. So we are constantly fighting for more staff and for a better system. We believe that we need to take profits completely out of healthcare. It’s just immoral that a small minority of people are making billions of dollars off of other people getting sick.

We think things can change. So we provide information and strategies about how to change them. We organize meetings and discussions to share this information and to learn from the experiences that other nurses are having. We then try to organize those nurses to take action. We circulate petitions, we organize marches and rallies, and if things get really desperate, we might even try to organize a strike to force our hospitals to change. Our main focus has been on fighting to hire more nurses, to get a Medicare For All healthcare system, get more funding for public hospitals, and to end racial disparities in healthcare.

Dayanara: What is your opinion on Medicare for All (MFA)?

Sean: It’s the only immediate solution to the broken system we have right now. Right now, insurance companies decide what healthcare people get. MFA gets rid of them and allows everyone access to the care they need without worrying how to pay for it. It would also cover undocumented immigrants, and gives everyone access to the same kind of healthcare. A much less discussed aspect to MFA is that it would also equalize funding to hospitals.

It’s a tough fight, because the insurance companies, pharmaceutical companies, and the rich hospitals all are against it. They’re making too much money off the current system. And they use that money to buy politicians. So we need to focus on building a nurse-powered, union-powered, and people-powered movement to make this happen.

Dayanara: What do you think the government could have done to help prevent the pandemic from becoming so widespread?

Sean: There was a full two months between January and March where very little was done to prepare for this crisis.

First and foremost, the government failed to produce millions of tests that could have been used to test people at the beginning to find out where the disease was spreading, then providing resources to isolate and contain those people.

Second, once we realized there was a shortage of masks and other protective equipment (PPE) for healthcare workers, the government could have forced companies to make more very quickly. There’s a law called the Defense Production Act that allows them to do this. But they didn’t. This meant that thousands of healthcare workers were exposed to the virus. Thousands of them got sick from COVID-19, and dozens of them have died so far. It was a disaster that could have easily been prevented. Other countries were able to prevent this by having enough PPE for the healthcare workers.

Third, they should have implemented social distancing and closed schools and businesses at least a week earlier than they did. This delay cost a lot of lives and resulted in many unnecessary deaths of school workers.

Fourth, they could have been increasing the amount of hospital beds, doctors, nurses, and key supplies like ventilators for years to prepare for this possibility. Instead they were cutting all of these.

Dayanara: What do you think of the “clap for our carers” applause and use of the term “healthcare hero” in communities around the world?

Sean: The clapping is amazing. When I’m home I hear it in my neighborhood every night at 7pm. During normal times, the really great things we do often go unnoticed and unappreciated. So it’s really great to feel appreciated by your neighbors. The same goes for all the donations we’ve received. Everyday we get meals, snacks, desserts, and messages of support from the community around our hospital. And since we’ve been speaking out about the lack of N95 masks and PPE, we’ve gotten lots of donations from ordinary people. This feeling of solidarity, of everyone being in the same struggle and supporting each other is one of the best feelings in the world.

I have mixed feelings about being called a “hero”. On the one hand, I definitely see heroic things happening every day. For most of us, just going to work is a heroic act in my opinion. And I appreciate when other people in the community recognize the situation that we’re in and express their support by calling us heroes.

But, on the other hand, I feel like when politicians call us heroes, it’s a way of trying to avoid providing the things that we need. Because heroes don’t ask for more, they suffer in silence. Heroes die in battle. I feel like it’s a way to get people to accept the fact that many are making the ultimate sacrifice. I feel like they want the public to think that healthcare worker casualties were inevitable in this, that we are necessary collateral damage. When the reality is, as many other countries have proven, most of the deaths and illnesses of healthcare workers could have been prevented.

Dayanara: After all of this is over, do you think you will still want to be a pediatric nurse? Why?

Sean: This crisis has revealed to me how important nurses are to fight diseases like COVID-19. It also has revealed to me that we can be a key force in the fight to make the necessary changes to our healthcare system for the future. It has made me fear for my life in a way that I hadn’t really ever before. And that was scary. It was also scary for my family. It never occurred to me that I would be risking my life to do my job. But in the end, for me it’s worth it.