Someday, you could be an Environmental Scientist 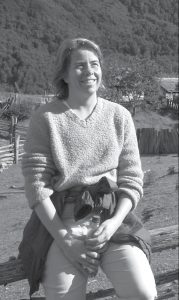 With a PhD in chemistry, Anna turned down high-paying jobs at chemical companies to work as staff scientist at Earthjustice and program director at a sister organization, the Interamerican Association for Environmental Defense (AIDA). Both groups, staffed mostly by lawyers, fight environmental damage worldwide. Besides helping organize and strategize, Anna makes sure the lawyers get their scientific facts straight!

IndyKids: Did you know as a kid that you wanted to become an environmental scientist?

Anna Cederstav: I knew I wanted to make the world better. I grew up in Sweden, where nobody’s land is completely “private.” You can camp in someone’s front yard if you want. So I understood that we all have a right and a duty to protect the earth we share.

IK: How does your work let you bring about change in the world?

AC: It’s a one-two punch: We figure out the root scientific causes of environmental problems, and then use the legal system, education, and political pressure to create solutions.

IK: What’s been a high point in your job?

AC: We helped pressure the Costa Rican government into canceling an oil-drilling project. That saved beaches, wetlands, and the lives of dolphins, fish and endangered marine turtles.

IK: Do you travel much?

AC: I’ve visited some of the most spectacular and dreariest places in the hemisphere—from beaches and rainforests needing protection to open mine pits and places people were being exploited by big corporations.

IK: Any tips for kids interested in environmental science?

AC: Do your math and chemistry homework. Then go to college, and get an advanced degree. Also, get active now, like by starting a global warming club at school to educate other kids and their families. For more information: See www.earthjustice.org and www.aida-americas.org.