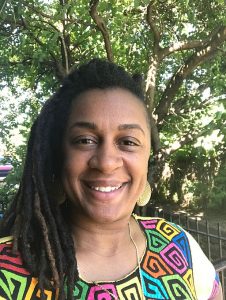 Janvieve Williams Comrie is an Afro-Latina activist living in the Bronx. Not only has she worked with several human rights organizations, including the Office of the High Commissioner on Human Rights Regional Office for Central America, but she has also started her own and is working on a book on the experience that Black Latinas (Afro-Latina women) have in the United States. Williams is dedicated to standing up for the rights of Afro-Latin@s and human rights in general.

What inspired you to become an activist?

The area where I grew up in the Republic of Panama, there were a lot of Black people. My parents actually helped to build the school that I went to. That school was very centered in Afro-Panamanian history, people, culture, pride and everything else. It was really from there where I decided that I was going to be an activist, because it gave me the foundation to organize. It was because we were the only Black school against everybody else, and people just didn’t respect that. So it was a constant battle. We had to fight for our (Afro-Panamanian) rights. We deserved to have this great education. That was really what brought me into organizing and activism.

How do you keep yourself motivated to keep pursuing your career as an activist when the results don’t make the impact you wished for?

It’s not a choice for me. I am one of the people that other people have fought for, so I have a big responsibility. Also, now I’m a mother, so if I don’t do my part, what kind of life are my children going to have, if they don’t have any rights? I know that my ancestors did the work that I’m doing now to open doors so that I can be where I am now. So I have to give back, and I think it’s a responsibility that we all have, to each other.

How do you integrate being a mother (having a family) with your social justice work?

To me, it’s not separate. I also have a partner that has the same values. The first thing is that my values as a mother are the values of my whole family. So they’re not just my values. We (Janvieve and her partner) are clear that for our children to be awesome and amazing, they have to be part of these communities that are fighting for their rights, communities that look like them, wherever they are or will be. Those communities are fighting for kids like them to thrive. It’s my responsibility to make sure that they know this.