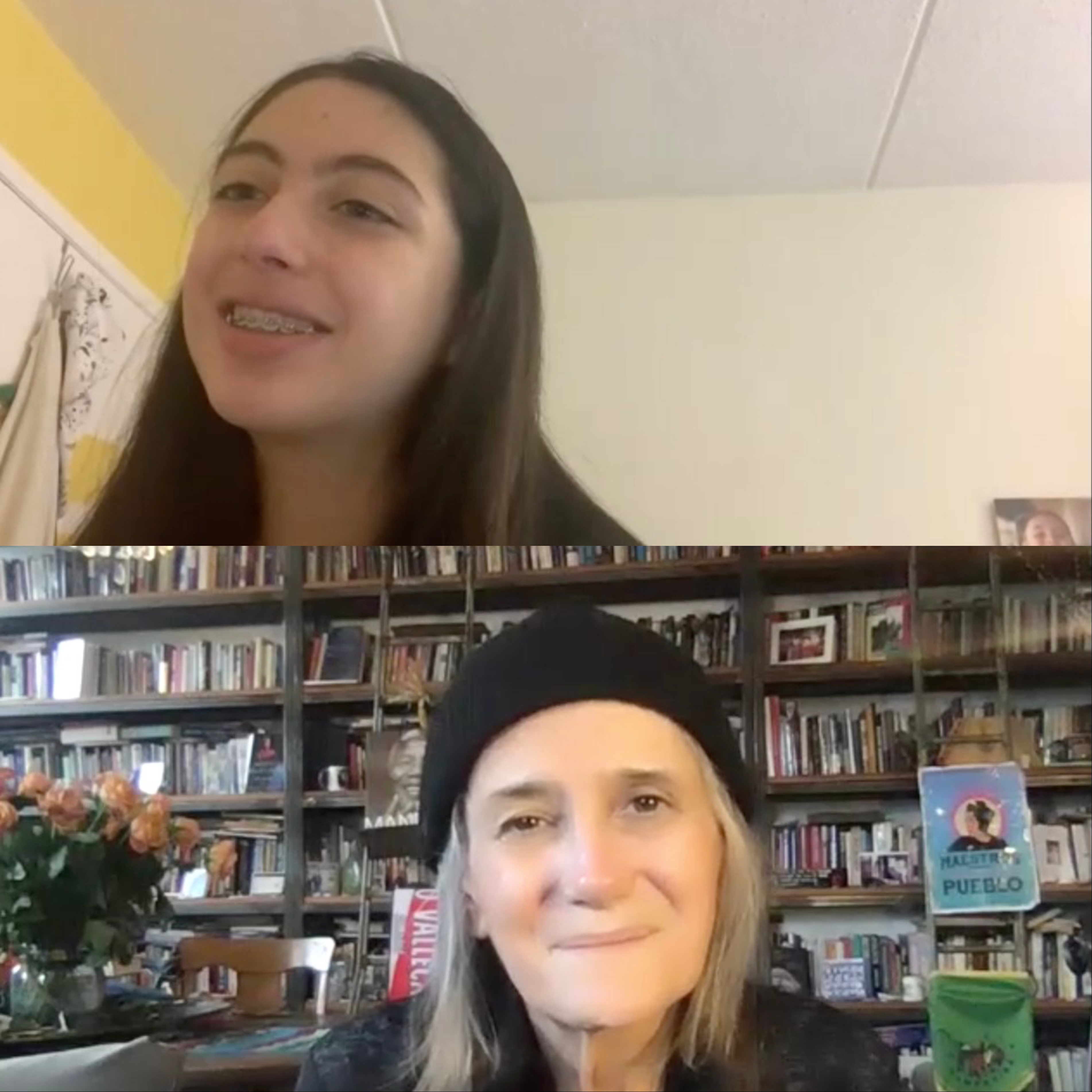 Amy Goodman is an award-winning journalist, investigative reporter, human rights activist and host of Democracy Now! for the last 25 years. IndyKid reporter Lucia met with Amy to discuss her career and legacy as a social justice journalist.

LUCIA: You started as a reporter for Pacifica’s NYC community radio station and co-founded Democracy Now! a decade later. What made you choose independent networks over more mainstream news outlets?

AMY: I was lucky enough to find at the beginning of my career what journalists look for their whole life, and that is independence, independent media, and that was WBAI radio in New York, 99.5 FM. You really got to know the communities at the grassroots level, and [the station] wasn’t interrupted every five or six minutes to sell you a weapon system or a drug the way commercial media is interrupted for a fossil fuel company commercial, an oil, gas, coal company commercial, just people speaking for themselves from their hearts about their communities. And I was extremely drawn to this. And then I [was asked] if I would like to co-host Democracy Now! in 1996. I was in Haiti [at the time] in an underground house. In Haiti, most people voted, and many got killed [for doing so]. In the United States, we don’t face anything like that danger, yet most people didn’t vote. And I wanted to find out why. I didn’t think it was that people were apathetic, that they didn’t care. But I wanted to know: What are they doing? Because what we do in the United States, as we know, as the most powerful country on Earth, matters.

LUCIA: Thirty years ago, you traveled to East Timor for a story and ended up witnessing a massacre, as well as suffering through injuries. At that moment, what was going through your mind? What do you think of it now?

AMY: In 1975, the fourth-largest army in the world, the Indonesian military, invaded East Timor, occupied it and committed one of the great genocides of the 20th century. And they were armed and financed and trained by the United States. I thought if people in this country knew about this, they wouldn’t allow this. That’s why journalists are so important. [They allow] people to make up their own minds. It’s their taxpayer dollars that go to the weapons that end up in the hands of this murderous army. In 1991, [I went there with Allan Nairn], and it was a true hell on earth. The Indonesian military was everywhere. The people who wanted to talk to us were risking their lives, but they still did it.

We followed this massive protest, [but] there’s no mass gatherings allowed in East Timor.  When we got to the cemetery, we saw the Indonesian military, 10 to 12 abreast, armed with their U.S.M-16s. [The protesters] were totally peaceful, so when we saw the soldiers coming, we thought, “How can we stop this?” We were hiding our equipment because we didn’t want to endanger anyone caught talking to a journalist. But now we took it out. I held up my microphone like a flag. Allan put the camera above his head. We walked to the front of the crowd. The soldiers marched up. Without any warning, without any hesitation, without any provocation, they opened fire on the crowd. A group of soldiers took my microphone. They beat me to the ground. The only thing I had left was my passport. They asked if we were from Australia. We said, “No, America.” And we think that was the reason they pulled their guns from our heads eventually, because we were from the same place their weapons were from. They would have to pay a price for killing us that they had never had to pay for killing the Timorese. They killed over 270 people on that day. And that wasn’t one of the larger massacres. If we can get word out, it’s a shield to people all over the world. That’s the power of independent media. We were journalists. And I think that has really determined my whole life as a journalist and as a human being.

LUCIA: In 2000, you interviewed President Bill Clinton. Nearing the end of the interview, he called your questions hostile, combative and disrespectful. Have you had any other experiences similar to these during an interview? If so, how do you approach them?

AMY: Journalists prepare their whole lives for an interview with the president of the United States. He’s the most powerful person on Earth. We asked him very serious questions… I asked him [about] Al Gore, who was then running for president, [who had said] that he would issue an executive order banning racial profiling. The police could just stop someone if they were African American or a person of color. I said to Clinton, if the two of them had been in office for eight years, why haven’t they done that yet? [President Clinton] said, “I find your questions hostile, combative, and at times disrespectful.” And I said, “They’re just critical questions,” because I didn’t believe the press should go on bended knee to the president. But that’s our job. We’re not there to win a popularity contest. We’re there to hold those in power accountable. I see the media as essential to the functioning of a democratic society.

LUCIA: As mentioned previously, you’ve gone through some difficult situations, such as arrest, physical violence and more. Have you ever been too frightened to report a story? How much danger are you willing to put yourself in?

AMY: I’m often scared. But that doesn’t mean I won’t do the story, because the danger that the people are in who are talking to me or other journalists is so much greater. We are really protected as American journalists, so I feel it’s my responsibility. It’s my responsibility to go where the corporate media doesn’t go. When you go to that place, it’s often not silent. It is raucous. It is loud. People are speaking. It just doesn’t hit the corporate media radar screen. That’s where we belong.

LUCIA: You received the Gandhi Peace Award nine years ago for a “significant contribution to the promotion of an enduring international peace.” What does this award mean to you?

AMY: I have always felt that when people can speak for themselves, they change the world. But it takes the rest of the world hearing them. And that’s where independent media comes in, to provide a forum for people to speak for themselves. When you hear someone speaking from their own experience, whether it is a Palestinian child or an Israeli grandmother or a teenager on the Standing Rock Sioux Reservation in North Dakota or a mother in Iraq or Afghanistan, when you hear that person speak, it changes you. You come to understand where they’re coming from. It makes it much less likely that you’ll want to destroy them. It’s that understanding. That’s the beginning of peace. I think the media can be the greatest force for peace on Earth. Instead, all too often it’s wielded as a weapon of war. And that’s why we have to take the media back.

LUCIA: As a child, your parents were both active members in your community. How do you think this affected you growing up? Which beliefs did your parents have that you wish to carry on?

AMY: My parents were such major influences on my life. My dad was an eye doctor in our community, but he also was a community activist, and he led a task force that integrated the schools of our community. I grew up in Bay Shore, Long Island. He was with a group called Physicians for Social Responsibility. And my mom taught women’s history and literature at local community colleges. She really taught me about the origins of feminism, but, more importantly, what it meant to be a feminist. My parents met at camp. One year, my mom was voted the funniest, and the next year she was voted the most serious. So she was everything. She put it all together. [She also] worked with people in the community. She helped to found a local chapter of SANE/Freeze; she was a peace activist, as well. They taught me deep respect for everyone, that all voices needed to be heard. I hope I could live up to their legacy, not their expectations, because they didn’t have particular expectations for us. My lesson from my education growing up and being steeped in our family’s history, the whole idea of “never again,” after the Holocaust, was not only for Jews being killed and annihilated in Europe, but when any person is oppressed, we are all oppressed, and how important it is to fight every day to ensure not only people’s safety, but to fight for democracy. We have to fight for it every single day.

LUCIA: What are your hopes for future journalists? What work still needs to be done?

AMY: Oh, there’s so much work that has to be done. And I encourage everyone, in your lives, to be journalists, even when you do other things, as well. For example, through this pandemic. The pandemic has taught us we have to protect each other. But whether or not you’re a journalist, when you grow up keeping a record of what you do every day or every week, because getting through this is incredible, we have to remember this in our lives, and to chronicle this is so important. So I suggest to everyone, whatever you end up doing in your life, be a journalist now, a citizen journalist. And when I say citizen, I mean citizen of the world, the whole idea of how separation brings us all together and how we protect each other in the years to come. So keep a journal. You may not want to look at it for years, but when your kids and grandchildren say, “Oh my god, you lived through the coronavirus pandemic,” you can then go back to those journals and talk about the ways you had to cope, the ways you fought to keep the ones you love close and together even when you couldn’t be with them.

LUCIA: What advice do you have for young people who are committed to social justice?

[This interview has been edited for length and clarity.]

2 thoughts on “Someday You Could Be… Amy Goodman”