Someday You Could Be a Scientist Like Sajan Saini 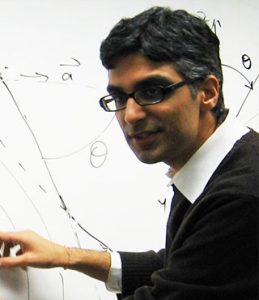 Sajan Saini is a scientist and professor who specializes in photonics, a special technology that manipulates or changes light for different purposes. He received his doctoral degree in materials science at MIT in 2004 and has worked with the MIT Microphotonics Center as a postdoctoral associate. He has also been a professor with the Physics Department at Queens College of CUNY (City University of New York) and lectured with the Writing Program at Princeton University. He has taught courses on photonics, introductory quantum physics, general astronomy, scientific writing, graphic novels and science fiction, and climate science communications.

1. What is photonics, and what work do you do in the area of photonics?

Photonics is a vast array of technologies that manipulate light — its creation, flow and detection — and are used to realize flat-screen displays, LEDs and laser diodes, digital cameras, and fiber optics for telecommunications — for example, telephone signals, internet communication, and cable television signals and data centers. I’m the education director of a national workforce training project at MIT focused on integrated photonics: a new class of photonics in which light signals are guided within micrometer-scale “optical circuits,” analogous to computer chips, to enable new applications in cloud computing, high-speed wireless communications, gas and medical sensing, and 3D imaging.

2. Why did you want to become a scientist?

I was deeply inspired by the astronomer Carl Sagan’s documentary series Cosmos on public television and originally wanted to be an astronomer. And in high school, I found it thrilling to discover how physics could overlay a mathematical framework on reality; this made me want to learn how we discover the abstract principles that govern and predict natural phenomena.

3. What challenges do you face in your work?

Our workforce training project is trying to prepare future engineers and technicians for jobs in integrated photonics that are still three to five, or more, years from being fully defined. The great challenge here is to figure out a pragmatic curriculum for an industry undergoing a massive transformation: how to educate learners in skills that are relevant for careers today, while priming them with a second line of skills that will make them ready to graduate into new integrated photonics careers, a few years down the line. This sort of “education roadmapping” needs to be rigorously informed by the projected needs of the photonics industry, while retaining a necessary amount of older education content that gives learners a firm foundation in order to ultimately become independent lifelong learners.

4. How is photonics used in medicine?

Photonics is commonly used in the form of fiber optic devices in medicine — to image with minimal disruption inside patient bodies and use guided laser light to perform noninvasive surgery. More broadly, optical sensors, digital pills, X-rays/MRIs are used to measure the oxygen level in your blood, monitor gut chemistry and image body features, respectively. In addition, quantum dot markers are assisting in more precise cancer surgery. A next generation of lab-on-a-chip integrated photonics sensors are envisioned to one day perform rapid, complex diagnostics of our health from saliva, urine or blood samples.

5. How can photonics be used in self-driving cars?

Photonics are used in cars with microwave radar or infrared LiDAR (Light Detection and Ranging) to 3D-image nearby vehicles and pedestrians on a street, in order to help a self-driving car avoid obstacles. Integrated photonics will one day enhance LiDAR tools in autonomous vehicles and also enable high-speed wireless communications with vehicles.