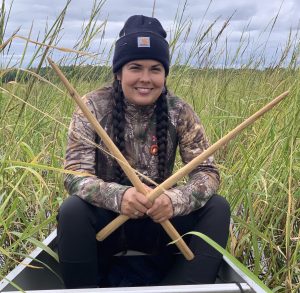 Tara Houska is Ojibwe from Couchiching First Nation. She’s an attorney (lawyer) and the co-founder of Not Your Mascots, an organization dedicated to fighting against stereotypical Native representations in sports. She’s also an adviser to Matriarch, a new political organization that tries to increase the number of women politicians from the grassroots, and she is a former adviser to presidential candidate Bernie Sanders.

Why did you decide to pursue activism?

It wasn’t planned or intentional. After a lot of years in college, law school and graduate school, I started working in private practice in D.C. At the same time, I saw so many things happening to my people and to the environment, that I began speaking out about it and writing articles. Soon I was dedicating most of my free hours to organizing and advocacy, and I was recruited out of private practice by the Bernie Sanders campaign and an environmental nonprofit at the same time.

What work do you do as a lawyer on Capitol Hill?

My first summer in D.C. was spent as a White House law clerk under President Obama, building connections in Congress and in the administration. As a full-time lawyer, I worked for many different tribal nations advocating on the Hill for everything from healthcare, education, environmental protection and contributing to draft legislation. Relationships with people are so very important. Remember that every person is owed respect, dignity and professionalism, no matter what their title.  `

Did you face any challenges in pursuing your career as a lawyer?

I didn’t really plan that either! For most of my life, I wanted to attend medical school. After spending a year learning about the administrative side of medicine, I shifted my focus and went to law school not knowing much about it. Law school was very expensive, and full of people whose parents were lawyers and judges. The law itself has many deep flaws when it comes to equality and justice for all.

I feel like in this era of activist movements such as #BlackLivesMatter, #MeToo, and LGBTQIA+ Pride, not enough attention is being paid to the rights of indigenous peoples, especially by the government. Why do you think there is such a gap?

One reason is quite simply that indigenous people are the smallest percentage of the population, due to genocidal policies and attempts to wipe us out of existence. Another is the difficulty most Americans have with addressing the truth of indigenous people.

Our history is often not taught in school, or if it is, there’s usually next to nothing about modern Native people and our experience today. Most people don’t know much more about Native people than racist Native mascots or the false story of Thanksgiving. We’re rarely on TV, in the news, in movies or any other mainstream platform.

In your TED Talk, you tell many stories of how indigenous peoples are put in danger, whether it be police brutality at protests while communities are protecting indigenous lands and water or simply the fact that Native women experience extremely high rates of violence, often perpetrated by non-Native men who aren’t subject to the same laws as they would be if these crimes were committed outside of reservations.

Despite these stories being recent, I’ve never heard any of this in the news. Do you think mainstream media neglects Indigenous struggles?

Yes. I think many more people would be interested in our stories, if those stories were given space and time. Especially as the world faces climate disaster, I hope the voices and teachings of the original peoples who still steward the land today, who hold 80% of the world’s remaining biodiversity, finally reach a wider audience. There are other ways of living, other values that hold answers for us all. My will comes from spending time with youth, and thinking of those who haven’t been born yet. Imagine how different the world would be if everyone acted in the interests of the next generation instead of just themselves, if people treated the Earth like a relative instead of something to endlessly take from.

What message do you want sent to young people about how we can learn more about the indigenous peoples on this land on which we live?

Native people are living in the 21st century too — many of us have Instagram, Snapchat, Twitter, all the social media. Give folks a follow! There are amazing young advocates writing for Teen Vogue, Al Jazeera and some of the lesser known publications, but we have voices out there, just do a bit of research! Figure out what tribes are in your area, see if maybe someone wants to partner on an event. When we stop repeating mistakes of the past and overcome ignorance of each other, we make progress and a better world.

Check out this article from Parade magazine for a head start: “25 Inspiring Indigenous American Activist Accounts to Follow to Learn About Indigenous People, Issues and Life”