Someday You Could Be a Community Organizer, like Aber Kawas 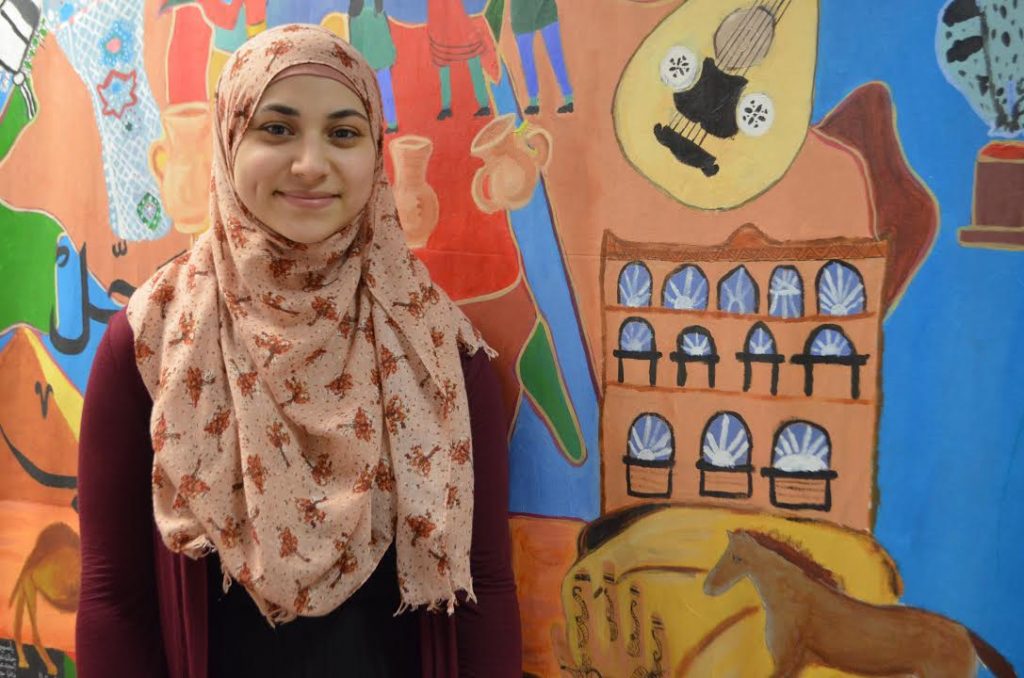 Have you noticed issues of religion, gender and race impacting your community, your family or yourself? Growing up in Brooklyn, activist Aber Kawas witnessed discrimination and violence against Muslims in her community. At 23 years old, Kawas fights social injustices as a lead youth organizer at the Arab American Association of New York.

Marisa Warman Hirschfield: Tell me a little about yourself.

Aber Kawas: I work at the Arab American Association, which is a small community organization that works on issues related to the Arab community. So, we work a lot with issues regarding the Muslim community because about 90 percent of the people that we serve are Muslims. We help refugees and immigrants who come into NYC and people who deal with racism because of their identity. I’m also Muslim American. I’m 23-years-old. I grew up in Brooklyn.

How did you get involved in activism?

I think that my identity growing up was a big part of it. My parents were immigrants. After September 11- just being a Muslim- I was in 4th grade growing up in school being Muslim, and that kind of showed me a lot. I faced a lot of discrimination growing up, and I saw a lot of people in my community face discrimination. My father was also an immigrant and then he was also deported because at the time a lot of Muslim men were being deported. That time period sort of drove me into being an activist, because of the things I saw around me happening. I wanted to fight against it and I wanted to make sure they didn’t happen to other people.

Do you feel like Islamophobia has gotten worse in the United States since election time started in 2015?

Yeah, actually that’s an interesting question, because you know I grew up around September 11th (you’re way too young to remember that time), but right after that time since then a lot of American Muslims have faced discrimination. It’s been 15 years, and you would think a lot of that would have died down eventually.

How do you feel Islamophobia in America impacts your daily life?

Personally, for me, nothing really violent happened to me. You know I think that I faced a lot of discrimination growing up where people didn’t want to talk to me, or they thought that I was weird or different. It’s hard to get a job sometimes because you look a certain way. I wear a hijab, which is the head scarf, so I feel like sometimes I have to work twice as hard to prove myself, that people hold all of these assumptions about me.

Especially whenever politicians say really horrible things about Muslims in the media, or if there’s a recent terror attack in the news and everyone is blaming Muslims for it, the next day I feel really self conscious going out into the street, because I feel that people are looking at me or are targeting me, I may feel that someone wants to do something violent to me. So, I’m really careful about who I’m walking with and how I look. Inside it causes a lot of anxiousness and nervousness.

What is like to be a Muslim activist? What are the challenges?

I think that being a Muslim activist is interesting because there haven’t been a lot of activists around. It only started happening ten to fifteen years ago. So, I think that as a community, we are still getting organized and we don’t have as much experience as other communities do in organizing.

In New York it’s kind of interesting, because I think there are over a million Muslims in New York, could be more, but we’re not all in one mosque. We don’t all attend one space, we’re all scattered around the city. So it’s really hard to try to unify several groups of people around, even though they may hold a similar identity, and the issues they face are very similar to each other. To get them all in a room together is very difficult.

That’s different than if you go to another state, like California or somewhere more rural like Virginia- there’s going to be one mosque like every hundred miles. So everybody would go to one space. That doesn’t mean that all the Muslims go to that one mosque, but you have the majority of people meeting in once space, whereas in New York you have 200 mosques so it’s very hard to organize in the city.

Do you feel optimistic or pessimistic about how Muslims will be treated in America in the future?

I feel optimistic. There is no choice but to feel optimistic because for Muslims or any racial group that gets discriminated against, the amount of fear and pain that that community faces is really hard to deal with. So if you’re going to be negative about it, then what’s happening to you is very negative. So you need to find a place of hope and a place of positive to organize and to stop these things from happening.

Candace Hoes: Do you have any advice for kids who want to become activists in your community?

Aber Kawas: There’s a million things that I can tell people, but I have been thinking about something recently that’s a really good piece of advice. That is, people think that activism comprises of organizing, giving speeches, and getting people together, but one really important part about being an activist is being really creative and imaginative.

And the key is for you to be able to imagine what the world looks like without the problems that you’re fighting. So you really have to actively try imagine what the world, what the US, what New York City, what Brooklyn looks like without racism. I try to imagine a world like that. What does the world look like when people are not poor? What do the streets look like when everyone is equal? You have to have an imagination and you have to have a belief that that’s the way it could happen.

It might not happen when you’re alive, or it might not happen because of the work that you’re doing. Maybe something you did 15 years ago, or something you do right now can affect people 15 years from now. You don’t know that, but you have to believe and keep imagining that world because that’s how you’ll get there. If no one ever imagined a world without racism, or with women’s rights or rights for certain groups of people, then it would never really happen. So that’s a way to keep yourself positive.

I wanted to ask you about microaggressions. You mentioned that Islamophobia doesn’t always impact you in a large way, but what do you do when someone in even an imperceptible way is discriminating against you?

Yeah, so that’s tough. Microaggressions are sometimes just looks, sometimes there are people constantly mispronouncing your name. Things like that have everything to do with your identity. It’s not as acceptable as everyone may think it is. I don’t know, it kind of just depends on when I’m dealing with it and how I’m dealing with it. So, if I find a space where I can have a conversation with somebody and explain something to them if they seem open and receptive, then I will.

Unfortunately for someone who has a racial-ethnic identity, whether it’s for someone being Muslim or or being black or Latino or any other ethnicity, we face this stuff all day every day. It can consume so much of your energy that you don’t have time sit there and to explain to everyone single person who’s being racist to you why they shouldn’t be. That would consume all of your time. Actually, if it’s something that’s hurting you, you shouldn’t have to explain to someone else why it’s hurting you. It isn’t necessarily our responsibility to do that, I think it’s collectively the responsibly of people to change themselves and educate each other.

But there are small things that I do. Like whenever I go to place I make sure to pronounce my name correctly, and if someone does, I say, “I’m going to say it for you slowly, please notice how I saw my name.” Sometimes I use humor. I work a job where I kind of have to prove myself and it breaks the ice when you tell a joke. Then people kind of check themselves without having to be embarrassed about it. I deal with it different in different spaces, and sometimes people are just rude or something like that, but I can’t deal with it every single time, even though I want to.

I do try to do long term things and proactive things. I do workshops where I go to middle schools and high schools to talk about Islamophobia and racism and things like that. When I do something like that, my hope is that the 30 kids in the room who did that workshop with will go out into the world and not do those things to other people. I try to proactively fix these things in a long-term-solution kind of way.