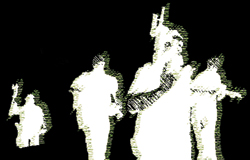 Currently about 160,000 U.S. troops are in Iraq, but many people don’t realize that there are also about 180,000 people in Iraq working for the U.S. military through private companies. Called “military contractors,” some of these private companies are hired to provide security — including guarding U.S. officials, training military recruits and supplying the Army with backup helicopters and pilots. One of the largest of these companies is Blackwater USA.

On September 16, Blackwater employees shot at cars driving through Nunsoor Square in Baghdad, killing 17 unarmed Iraqi civilians. Blackwater says its men were defending themselves and should not be in trouble. But, an independent Iraqi investigation found that Blackwater employees opened fire on the Iraqis without any reason.

Government records show that Blackwater forces have been involved in an unusually high number of violent events. But since not all of these are reported, no one knows for sure how many Iraqis have been killed by Blackwater or other professional security companies. Until the Baghdad shootings, employees of Blackwater and similar security companies could not be charged in U.S. courts for crimes in Iraq, unlike U.S. soldiers.

The event has made many people look more closely at the company and the role of private military contractors. Congress has opened an investigation into Blackwater and the Iraqi government is demanding that Blackwater leave the country.

WHAT KIDS ARE SAYING ABOUT THE WAR

Sixty-four percent of Americans would like to see U.S. troops out of Iraq within a year according to polls by Rasmussen Reports. Here’s what some kids have to say about the U.S. war in Iraq:

“The war in Iraq should stop. It’s killing their people and it’s taking too many people from the U.S.” – Arryana, 5th grade, Oakland, Calif.

“I feel bad because a girl’s leg got exploded. There’s no life over there.” – Anelyn, 7th grade, New York City

“They’re fighting for oil and it’s stupid to fight over that.” – Kevari, 5th grade, Oakland, Calif.