By DESTINY JACKSON and PAULA MCINTOSH 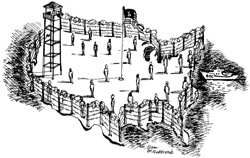 Many people who are in prison come from communities that are in poverty. Some are going for illegal drug use. According to statistics only about half are in prison for violent crimes. Some are in prison and it’s not even their fault. Yes, there have been people incarcerated unfairly. There have been men and women who actually go and stay in prison for fighting for their rights. They are called political prisoners. All of this incarceration is taking mothers and fathers away from their children. It also takes children away from their families.

One thing that contributes to the numbers of blacks in prison is that there are stereotypes that many people have about blacks, especially males. Based on the images on TV and in movies, black people are viewed as dangerous or criminals, even when they’re not. Also, many people in prison don’t have a good education so they can’t get good jobs.

One solution to help keep people out of prison is to provide education so that people can get jobs. Remember, a lot of people commit crimes because they need money, food or things to give them a better life. Also people need to fight against stereotypes and discrimination.

If we all begin to see ourselves as humans, then we will begin to make sure that all people are treated fairly.

Reprinted from Voices of the Scribe Street Activists, a periodical from the fifth grade at the Culture and Language Academy of Success in Los Angeles.

2 thoughts on “Schools, Not Prisons”