'Salam, I Come in Peace': Muslims Stand Up Against Islamophobia 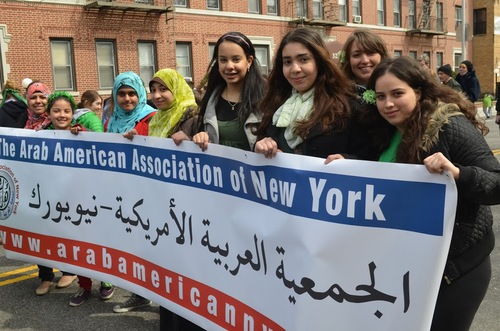 On January 8, 2016, a 56-year-old Muslim woman names Rose Hamid attended a Donald Trump rally in South Carolina to protest what she saw as his anti-Muslim views. During the rally, she silently stood up wearing a shirt that said, “Salam, I come in peace.” Soon, Trump supporters started loudly chanting his name and pointing at her, and security appeared to escort her out. After the rally, she told news sources that some people around her asked if she was carrying a bomb.

“This demonstrates how when you start dehumanizing the other, it can turn people into very hateful, ugly people,” Hamid told CNN. “It needs to be known.”

Islamophobia is a mindset of fear and hatred toward Muslims. Islamophobic thinking casts Muslims as terrorists and often misinterprets Islam, the religion of Muslims. Even a name that might sound Arabic is at times enough information for many Americans to feel justified to profile Muslims. For example, when Public Policy Polling asked 530 Republicans if they would bomb Agrabah, the fake city from the movie Aladdin, 30 percent said they would and only 13 percent opposed it.

Because of these biases, 51 percent of Americans are against allowing refugees from war-torn Syria into the United States, since they may be Muslim. Presidential hopeful Ted Cruz even suggested only letting in Christian Syrian refugees.

Aeromexico has apologized to Waris Ahluwalia, a Sikh American actor, for wrongfully detaining him when boarding a plane from Mexico City back to the United States. PHOTO: Viv Lynch/Flickr

People who are not Muslim but are assumed to be Muslim have also experienced discrimination and even violence because of Islamophobia. And Islamophobia is not limited to the United States. Waris Ahluwalia, a Sikh American actor and designer, was detained when boarding a plane from Mexico City back to the United States after refusing to remove his turban.

Attacks against Muslims in the United States―including threats to mosques and hijab-wearing students―have tripled since the November 2015 Paris attacks.

Hand in hand with racism, Islamophobia can impact the emotional and physiological health of Muslims. According to the Runnymede Trust, a think tank that works on racial equality, the constant worry of being targeted can lead to depression, anxiety and even heart disease.

“Whenever politicians say really horrible things about Muslims in the media, the next day I feel really self-conscious going out into the street,” Aber Kawas, a 23-year-old Muslim activist from Brooklyn, New York, told IndyKids. “So, I’m really careful about who I’m walking with and how I look. Inside, it causes a lot of anxiousness and nervousness.”

Kawas works at the Arab American Association of New York helping refugees and immigrants, 90 percent of whom are Muslim. She says Muslim activism is relatively new in Brooklyn, but it is growing. Kawas hopes that by working with younger kids, she can make the future brighter for Muslims in the United States.

“I do workshops where I go to middle schools and high schools to talk about Islamophobia and racism,” she said. “When I do something like that, my hope is that the 30 kids in the room who did that workshop will go out into the world and not do those things to other people.”

Glossary of Terms:
Salam: “Hello” in Arabic.
Dehumanizing: The act of taking away the positive human qualities of an individual or group.
Arabic: The language of the Qur’an, the Muslim holy book. It is one of the most widely spoken languages in the world.
Sikh: Sikhism is a 500-year-old religion with more than 20 million followers worldwide. To be Sikh is to be a person who practices Sikhism.
Mosque: Spaces where Muslims worship.
Hijab: A veil or scarf worn by Muslim women.