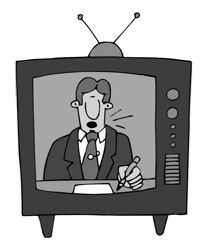 Nicky Robare is a young media-maker from Oregon. Nicky made an animated film starring a clay figure who explains to her friends, “If there was one person who decided to tell you that two plus two equals five, you wouldn’t believe her, right? Well, that’s because there are plenty of other people to tell you that it equals four. But if that one person was the only person you could ever ask, you would probably believe her just because you didn’t have any other options.”

Think about the options we have in our media. Media is everywhere. It’s the very thing that let’s us know what’s in, what’s not, what’s cool and what’s hot. It’s on billboards, newsstands, buildings, busses and trains. Without media, how would people get information?

Did you know that media used to be made up of a diversity of voices, but now there are only a few large corporations that own all of the other smaller companies? These corporations play a large part in controlling what you see, learn about and think is important.

Much of what the mainstream media covers and portrays doesn’t reflect real life, and many people, especially young people, don’t identify with this media. Manhattan Neighborhood Network’s Youth Channel (YC) has a workshop that teaches basic media literacy.

If you are literate, it means you can read. Being media-literate means that you can read the messages the media is sending you, instead of just accepting them.