Read All About Being a Journalist! 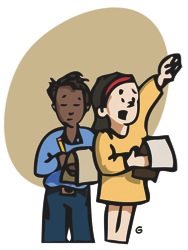 The United Nations Universal Declaration of Human Rights guarantees the right to seek, receive and to give information. That means we have the right to know what’s going on in the world. It is the job of journalists to help us get information. Their reports are published in newspapers and magazines, on the radio, TV and Internet.

HOW IS A STORY CREATED?

Shay Everitt, a reporter and journalism student and a contributing writer for the San Jacinto Times in Texas, had this to say:

“First the story idea has to be formed. It comes from the journalist, their boss or other outside sources. Once that happens then the journalist has to find and contact sources to interview. Then you set up an interview with the person. You must create questions that will help you get the information you want. During an interview I have found that unless there is a time limit you should let the person speak as much as they want because the more information, the better. Then you pick out key information from the interviews and put it together in the story.

“From there write about the most important things first, leaving the least important things for the end. You submit it to the editor or producer for evaluation. Then there is some communication back and forth a few times to make sure the information is accurate and everything is grammatically correct. And then it is done.”

What has been Shay’s most exciting moment as a journalist?

“When I first heard myself on the radio. It was thrilling to know that I conducted the interviews, wrote the story, edited the story and recorded it all on my own.”

ELEMENTS OF A NEWS ARTICLE

Be a Journalist! Many people believe that a journalist is anyone who reports on events. This is “citizen journalism,” an idea that if we only hear our news from journalists who are paid by corporate-owned media sources, then we will never hear important stories. Anyone can be a journalist. To report like a professional, keep these things in mind:

In the beginning of your article, you should give the broad overview of the situation. Then, you should narrow your focus, until it becomes extremely specific. Be sure to use quotations from people you interview and check your facts.

Keep in mind that there are many kinds of news. You could write “hard news” — current events and reports on situations. You could write “soft news” — profiles of people and organizations. Or you could do both. What kind of news do you want to report?

Investigative journalism is journalism that uncovers information that has been kept secret, such as government wrongdoing or crimes of powerful people. Often, we would never know about these things if a person who witnessed something didn’t tell a journalist about it. This person is called a confidential source. The journalist cannot tell who her confidential source is or the person could get in trouble. What else would happen if a journalist were forced to reveal the names of her sources? 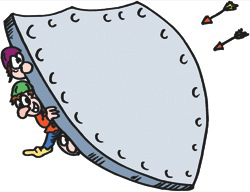 Journalists in some states are protected by “shield laws” which allow them to keep the names of their sources secret and keep their notes and video or sound recordings private.

Can you write an article using the following information?

Why: Michael’s pet snake was tired of being kept in a box!