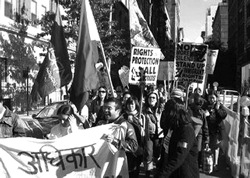 By ROLANDO AND DANIEL BINI

Saturday, October 21, was a beautiful day. About 2,000 people gathered in Union Square Park in New York City to rally for the rights of immigrants. One of the banners that read “No Human is Illegal” clearly defined the message of the day.

The rally was a response to Congress’ failure to propose and pass a fair and humane bill for immigrants. It was organized by New York United for Immigrant Rights, a coalition of more than 60 organizations in the New York City area. Marchers demanded that legal status be given to all undocumented immigrants and that the deportation and detention of immigrants be ended.

They also demanded family reunification, so that immigrant families can be together in the U.S. They urged the protection of the rights of all workers. There were many speakers who reaffirmed those messages. Councilman John Liu called on the City Council to support immigrants.

There were people of all nationalities at the rally. There were also old people, young people and plenty of families with children. There was lots of energy and joy. It was an affirmation of life, and everyone sent the clear message that they will not be silent when there is injustice done to immigrants.

After all, the United States is a nation of immigrants. After the program, the rally marched to Times Square chanting in Spanish, “Sí se puede!” (Yes, it can be done!)

Rolando and Daniel are a father and son team.