Racism & Resistance in Louisiana: How a ‘White Tree’ Led to the Trial of Six Black Youth 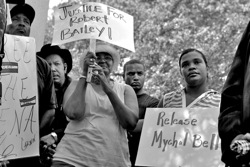 A year ago, in the small northern Louisiana town of Jena, a group of white students hung three nooses (ropes tied in a loop) from a tree in front of Jena High School. Now six black students who spoke up against racism are facing a lifetime in prison.

“I can make your lives disappear with a stroke of a pen,” he said.

One of the Jena Six students, Bryant Purvis, said, “I think the district attorney is pinning it on us to make an example of us. In Jena, people get accused of things they didn’t do a lot.” People from around the world have heard about the case and have joined to support the call to “Free the Jena Six!”

September 2006
A black student asks to sit under a tree where white students usually sit. The administration tells the black students to sit wherever they like. The next day, three ropes tied into nooses are found hanging from the tree. Nooses often represent lynching or when black people have been hanged and murdered. The white students who hung the ropes are suspended for three days.

December 2006
Six black students are arrested after a school fight in which a white student is beaten.

July 2007
One of the black students in the fight, Mychal Bell, 17, is convicted by an all-white jury of aggravated battery (beating) and conspiracy. His tennis shoes are considered “dangerous weapons.” Bell may get twenty-two years in prison.

August 2007
The Congressional Black Caucus of the U.S. Congress calls for the charges to be dropped. More than 60,000 signatures are collected asking Louisiana’s governor to pardon the Jena Six.

Fall 2007
The cases of the five other students are scheduled to be heard in court.