President Trump Was Impeached. What Does That Mean? 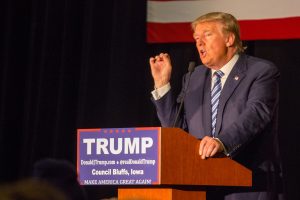 First up, it’s important to know that Congress, which is made up of members elected to represent the people, is comprised of two levels of government: the House of Representatives (also known as the House) and the Senate.

For a bill to become a law, it is voted on in the House and in the Senate. It has to successfully pass through two levels of Congress, with a majority of votes in both, to become law.

Similar voting processes also happen during an impeachment inquiry, because it needs a majority of votes to pass.

Impeachment is when the House brings charges against a president if they determine that he or she committed one of these articles of impeachment:

These are outlined in the U.S. Constitution, which is the rule book that guides how the country works.

What is “treason, bribery, or other high crimes and misdemeanors”?

Treason is when you betray your country. Bribery is when you attempt to persuade someone to act in your favor illegally through a gift or money, even if they don’t take it. A high crime and misdemeanor is an abuse of power—it does not have to be a crime. President Trump was Impeached on December 18 2019 for Abuse of Power and Obstruction of Congress which comes under the article, “high crimes and misdemeanors”.

What is President Trump accused of doing?

President Trump was accused of pressuring the nation of Ukraine to not just open, but publicly announce an investigation into Hunter Biden, the son of Joe Biden, who is the former U.S. vice president and Trump’s political rival who is running for president in 2020—despite there being little evidence of Hunter Biden doing something corrupt in his work in the Ukraine. The Democrats say that Trump did this to give himself an advantage in the next election—by publicly making Joe Biden look bad, even if Hunter Biden didn’t actually do anything corrupt.

When Trump asked the Ukrainian government to investigate Hunter Biden, he initially withheld military aid that they have been receiving from the United States. Democrats investigating Trump, say this act seems like a quid pro quo arrangement. Quid pro quo is a Latin phrase that means you will only do something if you get something in return. In this case, if proven, that would be bribery.

What happened during the Impeachment Vote in the House of Representatives?

A majority of members in the House of Representatives agreed that when President Trump pressured the Ukraine to investigate a political rival, he abused his power as president and didn’t act in the interests of the nation.

The article of impeachment read:

“President Trump engaged in this scheme or course of conduct for corrupt purposes in pursuit of personal political benefit. In so doing, President Trump used the powers of the Presidency in a manner that compromised the national security of the United States and undermined the integrity of the United States democratic process. He thus ignored and injured the interests of the Nation.”

Why does the U.S. give the Ukraine military aid?

The roots of this support are in the Cold War (1947-1991) when the United States was at war with Russia, which was part of the Soviet Union. At the center of this conflict were different political opinions or ideologies about how money and governments and labor work.

The U.S. had a capitalist economy, and the Soviet Union, or USSR, a communist one. The basic idea of communism is that everything is owned and controlled by a central government and ideally should be shared evenly among the people, though that doesn’t always happen in practice. A basic idea of capitalism is that goods and services are controlled by both the government and private businesses which compete with other companies for business and profit.

Even though the collapse of the Soviet Union in 1991 ended the Cold War, there are still tensions between Russia and the United States.

In 2014, the Russian military invaded and illegally took over or “annexed” Crimea in the eastern Ukraine after protests removed the Ukraine’s pro-Russian president.

Since then, the U.S. government has provided more than $1.6 billion in security assistance to the Ukraine to support its defense against Russia. Ukraine is also considered to be a politically important country as it is in between Russia and Europe.

There is debate over whether U.S. military aid to the Ukraine makes a peaceful solution between Russia and the Ukraine more difficult to achieve, but that’s a separate point.

Are President Trump’s actions against the U.S. Constitution?

Democratic House Speaker Nancy Pelosi said in her November press conference, “[T]he president abused his power and violated his oath by threatening to withhold military aid and a White House meeting in exchange for an investigation into his political rival — a clear attempt by the president to give himself an advantage in the 2020 election.”

Frank Bowman, a Georgetown law professor and former federal prosecutor, told Newsweek that even if it wasn’t a quid pro quo, what President Trump did was against the Constitution. “[E]ven asking a foreign country to do investigations of a political rival without offering anything in exchange is arguably impeachable. American presidents should not invite foreign governments to involve themselves in American elections.”

What is the process for impeachment and removal?

The process has varied from impeachment to impeachment, but in general:

Comprised – To be made up of.

Accused – When someone is charged with an offense but yet to be found guilty.

Corruption – To act dishonestly in return for money or personal gain.

Oath – A serious promise about your behavior or your actions. A U.S. president takes the oath of office by promising, “I do solemnly swear (or affirm) that I will faithfully execute the Office of President of the United States, and will to the best of my Ability, preserve, protect and defend the Constitution of the United States.”

Scheme- A plan or arrangement to try to get something.

Integrity- The quality of being honest and having strong moral principles.