President Gets Power to Approve Torture and Prison Without Trial 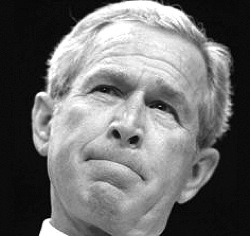 On October 17 President Bush signed a new law called the Military Commissions Act. The law allows the government to put people who are not U.S. citizens in prison without a court hearing. There are now more than 500 people held in U.S. government prisons who have filed habeas cases (see box on habeas corpus, upper left). Until now a prisoner held in a U.S. prison could file for habeas corpus if he or she was being imprisoned before a court hearing determined guilt or innocence.

But the passing of the new law means that the government can continue to hold someone in prison without a trial. The new law also expands the president’s powers and allows him to determine what is considered torture. With the law in effect, the government can carry out certain treatments that are commonly understood to be torture.

Vincent Warren, the executive director of the Center for Constitutional Rights, called the new law “an assault on the Constitution.”

Mr. Warren’s organization has already filed cases challenging imprisonment without trial for 25 men detained at the U.S. Bagram Air Force Base in Iraq, and for the case of a man from Baltimore who has been in prison in Guantánamo for three years without trial.