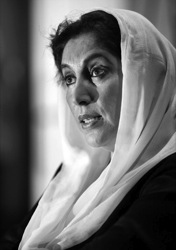 Pakistan’s President Musharraf’s government is suspected in the killing of Benazir Bhutto, above. Photo: Brian Snyder/Reuters

Former prime minister of Pakistan Benazir Bhutto was assassinated on December 27, a week before elections were supposed to take place in Pakistan.

Bhutto, who had been living outside the country, returned to Pakistan a few months earlier at the request of the Bush administration. She was campaigning for her family’s political party to challenge the rule of current President Pervez Musharraf. Many Pakistanis believe Musharraf, a military leader, was behind Bhutto’s killing. A British team is investigating to find out who killed her.

Pakistan is a Muslim country in central Asia and one of the U.S. government’s key allies in the area. Since September 11, 2001, the United States has provided more than $5 billion in military aid to the country. But Pakistan is not a democracy. President Musharraf came to power in a military take-over in 1999.

The U.S. government is pushing for elections, but observers and Bhutto herself believed the elections under Musharraf would be rigged. Musharraf has used the military to suspend the constitution twice — most recently declaring a state of emergency in Pakistan. Then he arrested lawyers and judges who challenged his rule. But Musharraf still has strong support from the U.S. and British governments.

“The U.S. and the U.K. are muting [silencing] their criticism on the grounds that Pakistan’s central role in the US-led ‘war on terror’ makes Musharraf an indispensable ally. This policy is as dangerous as it is flawed,” wrote Ali Dayan Hasan, South Asia researcher for Human Rights Watch.