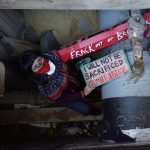 We’d like to thank The New York Community Trust and Wolf Family for their support.