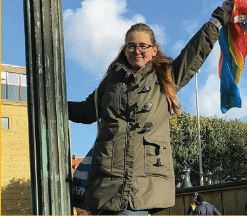 On July 23, a 21-year-old Swedish student activist named Elin Ersson saved an asylum seeker from being deported back to Afghanistan in Sweden’s Göteborg Landvetter airport.

She refused to sit down until he had left the plane. She was recording everything that happened on her phone. That video was later posted on Facebook.

The man was taken off the plane, but he may still be deported. Ersson was arrested but not punished because her protest is not a crime. Ersson told The Guardian “We need to start seeing the people whose lives our immigration [policies] are destroying.” Over the last 35 years Sweden has become more restrictive with its refugee policies.